RG3 To Start This Week For Browns

The Browns announced that quarterback Robert Griffin III will start this week. He’ll lead his 0-12 team against the Bengals as they look to avoid the embarrassment of a winless season. 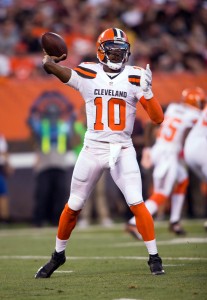 Griffin, who was named the team’s starter during training camp, suffered a shoulder injury in the season opener. Thanks to the new IR-DTR rules, the Browns were able to bring Griffin back for the final month of the regular season. Now, as the Browns try and figure out where to go from here, RG3 will have an opportunity to show that he should he the team’s starter heading into 2017. The Browns signed Griffin to a two-year, $15MM deal in the offseason. Both Hue Jackson and top exec Sashi Brown have said that Griffin was not signed as a short-term solution, but nothing will be guaranteed for the QB if he can’t perform over these next four games.