The Falcons have signed cornerback Robert Alford to a four-year, $38MM extension, according to Adam Schefter of ESPN.com (on Twitter). The deal includes $21MM guaranteed. The team has since confirmed the deal via press release. 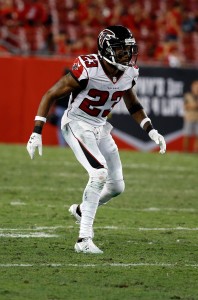 Alford, a second-round pick in 2013, was slated to hit the open market after the season. Atlanta, unwilling to lose a player who has started in every game he’s appeared in over the last three years, shelled out significant money to keep him locked up instead. This year, he has 47 total tackles with two interceptions, bringing his career total to nine picks. He also has 12 passes defensed on the season, which leads the team.

It should be noted that Alford tends to rack up penalties, and that might have something to do with his ranking as just the 71st best corner in the NFL this season out of 122 qualified players, according to Pro Football Focus. In fact, three other Falcons cornerbacks are ranked higher for their work this year: Jalen Collins (No. 17), Desmond Trufant (No. 30), and Brian Poole (No. 42). So far this year, Alford has committed five pass interference penalties, one holding penalty, one illegal use of hands penalty, and an unnecessary roughness call. His five PI flags rank second to only D.J. Hayden of the Raiders who has six.

The size of this deal is a sign that the Falcons probably value Alford a little more than others outside of the organization do. But, it’s also an indication that this year’s free agent market will be inflated with lots of teams taking advantage of the increased cap.