As we move closer to Week 2 Sunday, plenty of storylines have surfaced — much of them out of the AFC East. Antonio Brown is on track to make his Patriots debut, Minkah Fitzpatrick may or may not be on the trade block, and a mono-stricken Sam Darnold will miss the Jets’ Monday-nighter against the Browns. But let’s shift to a few items on the league’s periphery.

Vikings receiver Cayleb Jones has been accused of domestic assault. Andrew Krammer of the Star Tribune reports that the wideout was charged yesterday morning with “felony-level theft, misdemeanor domestic assault and a gross misdemeanor for interfering with an emergency call.” Jones was released from jail on conditional bond, with his pretrial hearing set for October 4th. 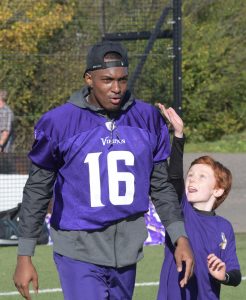 According to the report, officers were dispatched to a hotel following a 911 hangup. The victim called 911 a second time, claiming that “her boyfriend … put his hands on her.” The victim later said that Jones threw her to the ground, kicked her, and smacked a phone out of her hands while she was attempting to call police.

According to Krammer, Jones must “submit to random alcohol and controlled substance testing and cannot leave Minnesota without consent of the court.” The player will also be subject to discipline under the NFL’s personal conduct policy, and he’s already been suspended for the first four games of the upcoming season for violating the league’s performance-enhancing drug policy. The receiver was previously charged with second-degree felonious assault back in 2013.

“We are aware of the situation involving Cayleb Jones and are in the process of gathering more information,” said Spielman. “Further comment will be provided at the appropriate time.”

The 2016 undrafted free agent out of Arizona had a brief stint with the Eagles before catching on with the Vikings. He spent all of last season on the team’s practice squad, and he was competing with the likes of Tavarres King, Stacy Coley, and Brandon Zylstra for a roster spot. In two preseason games, Jones had hauled in three receptions for 34 yards.