In a surprising development, the Vikings will release starting offensive guard Alex Boone, according to Tom Pelissero and Ian Rapoport of NFL.com (Twitter link). 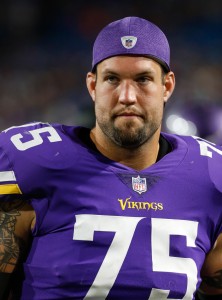 Boone was one of Minnesota’s most prized free agent additions just one year ago, as the former 49ers lineman agreed to a four-year, $26.8MM deal with the Vikings last spring. That deal contained $10MM in guaranteed money, a high price to pay for only a single season of work.

Boone’s contract does not contain offsets, meaning Minnesota won’t gain any salary relief if he signs elsewhere (Twitter link). The Vikings asked Boone to accept a paycut, but he refused, tweets Ben Goessling of the Star Tribune. Minnesota will take on $3.4MM in immediate dead money by cutting Boone.

A 14-game starter for the Vikings in 2016, Boone ranked as the NFL’s No. 37 guard among 75 qualifiers, per Pro Football Focus, which assigned him high marks for his pass blocking but poor scores in the run game. With Boone gone, Minnesota figures to turn the interior of its offensive line over to some combination of Joe Berger, Nick Easton, and rookie Pat Elflein.