END_OF_DOCUMENT_TOKEN_TO_BE_REPLACED

Eagles coach Doug Pederson told reporters that cornerback Aaron Grymes will be signed to the 53-man roster (Twitter link via Jeff McLane of the Philadelphia Inquirer). He will be active on Sunday against the Falcons. 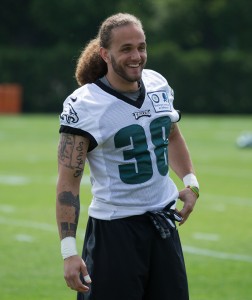 A couple of days ago, Pederson indicated that Grymes and wide receiver Paul Turner were in play to be promoted to the 53-man roster to fill their final spot. Ultimately, Eagles coaches decided that they needed the extra cushion in the secondary rather than at WR. The addition of Grymes gives the Eagles three reserve cornerbacks behind starters Nolan Carroll and Leodis McKelvin. McKelvin has been dealing with a hamstring issue as of late and Grymes’ promotion might not be a great sign for his Sunday status.

Meanwhile, the team will continue with four receivers on the 53-man: Jordan Matthews, Nelson Agholor, Dorial Green-Beckham, and Bryce Treggs. The Eagles toyed with the idea of adding a receiver to replace Josh Huff following his release, but they instead have decided to activate Treggs on gameday and use running back Wendell Smallwood as their return man.

Grymes, a former CFL standout, has been on the Eagles’ practice squad since late October. The 25-year-old is hoping to see his first taste of NFL regular season action this weekend.

Tony Romo ran the scout team for 11-on-11 and 7-on-7 drills during today’s Cowboys practice, and Ian Rapoport of NFL.com says (via Twitter) this a clear indication that the quarterback won’t be active this weekend. However, there is optimism for Romo’s return, as the 36-year-old was listed as a full participant in practice for the first time this year.

For what it’s worth, Romo’s teammates were excited for his return.

“He looks great,” linebacker Sean Lee told ESPN.com’s Todd Archer. “I mean he looks like he hasn’t missed a beat. His ability to throw the ball, I always say I’ve been here seven years and I haven’t been near a football when he goes against us just because of how great he is with this eyes, how quick he is with his release. It’s amazing taking the time off, he looks fantastic, like he hasn’t missed any time.”

Eagles cornerback Ron Brooks suffered a ruptured quadriceps tendon in Sunday’s win over the Vikings, a source tells Les Bowen of the Philadelphia Inquirer. Brooks will require surgery and he likely will not be fully healthy until training camp in July. Needless to say, the corner will be shut down for the season and placed on IR. 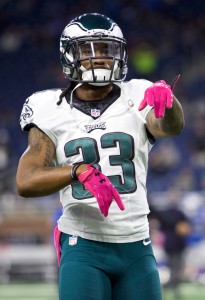 Brooks, 28, joined the Eagles as a free agent in March, following defensive coordinator Jim Schwartz from Buffalo along with Nigel Bradham and Leodis McKelvin. Prior to this season, Brooks started just three games in his career. This year, he started in five of six games as the team’s slot cornerback.

Meanwhile, the Eagles are meeting with cornerback Aaron Grymes today, according to Geoff Mosher of 97.5 The Fanatic (on Twitter). Grymes was a standout for the Eagles over the summer but was waived after suffering a shoulder injury. Grymes will take a physical at the team’s Novacare Complex and, if everything checks out, he could rejoin the team this week.

Brooks is in the first year of a three-year, $5.5MM deal, though the pact only includes $1.55MM guaranteed.