Despite waiving Patrick Omameh during the 2020 season, the Raiders have the veteran offensive lineman back on their roster. They re-signed the well-traveled guard Monday. 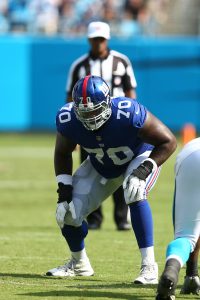 Omameh initially caught on with the Raiders in September of last year, after the Saints released him. He played in six games with Las Vegas, which was down Richie Incognito following Week 2. But the team cut Omameh in December. He later caught on with the Chiefs but did not see action in any of their playoff games.

During an offseason in which the Raiders have said goodbye to multiple longtime O-line staples — Rodney Hudson and Gabe Jackson — they have also re-signed several blockers. Incognito, Denzelle Good and now Omameh are back in the fold after spending time in free agency.

Omameh, 31, spent the bulk of his first five seasons as a starter but did so in a few cities. The former UDFA started at least seven games for the Buccaneers, Bears, Jaguars and Giants from 2014-18. The Giants, however, cut him midway through the ’18 season. Omameh has worked as a backup over the past two years, playing with the Saints and Raiders.

He stands to compete for a depth role for a team that has Incognito, Good and 2020 draftee John Simpson set to vie for first-string guard spots.

Although Richie Incognito avoided an Achilles tear, he will not return to the Raiders’ starting lineup for a while. The Raiders are placing the veteran guard on IR, Field Yates of ESPN.com tweets.

Incognito left Monday night’s game with an Achilles injury and will be out until at least Week 6. The Raiders moved rookie John Simpson into Incognito’s left guard spot against the Saints, pointing to the fourth-round Clemson product making a Week 3 start.

The Raiders gambled on the polarizing Incognito in free agency last year and were rewarded when the experienced blocker helped the team form one of the league’s top offensive lines. The Raiders then extended the 37-year-old guard through the 2021 season.

Viewed as a potential player who could replace offseason trade chip Gabe Jackson, Simpson instead saw time opposite Jackson in New Orleans. Pro Football Focus rated Incognito as one of its better guards last season, viewing him as an elite pass-blocking guard, and again had him off to a good start in 2020. Prior to Incognito missing the 2018 season amid more off-field trouble, he went to three straight Pro Bowls as a member of the Bills.

Las Vegas will fill Incognito’s roster spot with Patrick Omameh, a veteran guard who has made 57 career starts in eight NFL seasons. The Raiders added Omameh to their practice squad ahead of their Week 2 game.