Reggie Gilbert will have a chance to return to a regular-season role soon. The Lions signed the veteran pass rusher, according to the team. 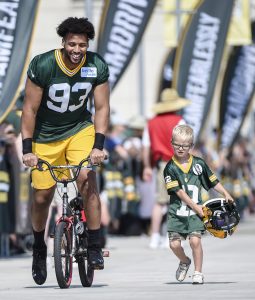 A knee injury during Titans training camp last year sidetracked his run with the team, and a waived/injured transaction took place soon after. Gilbert caught on with the Cardinals and Jaguars but did not play in a game with either team.

The Titans traded for Gilbert just ahead of the 2019 season and used him as a spot starter that year. The outside linebacker played a role for a Titans team hurting for edge presences opposite Harold Landry, starting in five games. He recorded 2.5 sacks in 16 games with the Packers in 2018, working as a backup with the NFC North squad from 2017-18. Green Bay loaded up on outside ‘backers in the 2019 offseason, however, and sent Gilbert elsewhere.

Detroit re-signed Romeo Okwara in free agency this year but went most of last season without Trey Flowers on the field. Flowers is set to return, and the Lions have 2020 third-round pick Julian Okwara in the mix as well. The Lions are moving to a 3-4 defense this year; Gilbert’s game action has come exclusively for teams who have used that scheme. The 28-year-old defender will now vie for a Detroit depth role.

After trading for Reggie Gilbert last year, the Titans used him as a spot starter and a rotational presence. They reached an agreement to extend Gilbert for the 2020 season on Tuesday.

Gilbert was set to be an exclusive-rights free agent, so this will bypass that process. Tennessee traded a seventh-rounder to Green Bay for Gilbert in late August of last year.

The former UDFA out of Arizona finished with 22 tackles and a sack in his Titans debut season. Gilbert made five starts for a Tennessee team that lost Cameron Wake early in the season and played 27% of the Titans’ defensive snaps.

The soon-to-be 27-year-old edge defender will be eligible for restricted free agency in 2021.

We’ve got another minor trade for you. This time, it’s the Packers sending outside linebacker Reggie Gilbert to the Titans in exchange for a seventh-round pick, sources told Adam Schefter of ESPN.com (Twitter link).

Gilbert entered the league as an undrafted free agent back in 2016, and he’s been in Green Bay ever since. Gilbert spent his entire rookie season on the practice squad, and then managed to get on the active roster for a bit in 2017. He was finally able to carve out a real role last season, when he appeared in all 16 games.

Playing in a rotational role, Gilbert racked up 38 tackles, 2.5 sacks, and two passes defended. All told he ended up playing over 45 percent of the defensive snaps, so he was more than just a bit contributor. The Arizona product will be a free agent after the season. The Titans could use some pass-rushing depth, so their interest makes some sense.

It’s not a coincidence that all these minor trades are starting to take place. It’s a way for teams to circumvent the waiver process and add depth before roster cutdowns by giving up late-round picks. These type of moves will continue to happen more and more as we get closer to cutdown day.