The impressive athleticism of German wide receiver Moritz Böhringer compelled the Vikings to take a flier on him in the sixth round of the 2016 draft. This year, the Bengals will take an up close look at him as a part of the NFL’s International Player Pathway program, the league announced. 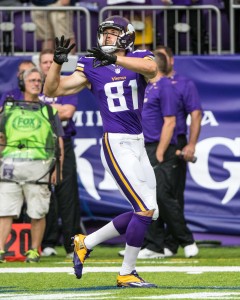 Böhringer is the only European player in NFL history to be selected in the draft without playing any college football. His lack of experience probably put a cap on his pro prospects as he spent his rookie year on Minnesota’s practice squad and did not sign with another team after his release in September. He’s still pursuing his pro dreams, however, and he’s slated to enter the year as the eleventh player on the Bengals’ practice squad.

The league’s International Player Pathway program will allow each AFC North team to carry an extra overseas player on their practice squad in 2018. Unlike those on the traditional ten-man practice squad, the additional player cannot be activated during the season. Last year, the NFC South had the honors.

END_OF_DOCUMENT_TOKEN_TO_BE_REPLACED

There were whispers that Stephen Tulloch‘s tenure with the Lions would conclude this offseason, but the veteran linebacker remains on the roster. With the offseason coming to an end, ESPN.com’s Michael Rothstein writes that there hasn’t been any clarity on the situation. Coach Jim Caldwell didn’t do much to clear up any of the confusion this past week.

“I think Bob [Quinn] has talked to you at length about that one,” Caldwell told Rothstein. “Know him and love him, but I think Bob’s answered that question.”