The Giants lost not only their Week 11 game yesterday, but a significant member of their receiving corps in the process. Rookie Wan’Dale Robinson suffered a torn ACL during the game, as head coach Brian Daboll confirmed Monday morning. 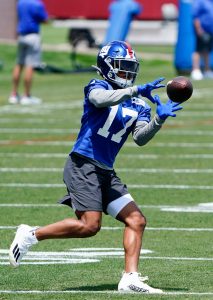 The news comes as little surprise after Robinson was carted off the field midway through the game. It nevertheless represents a major blow to New York’s WR room, which was already dealing with a number of injuries. The second-rounder had put up modest numbers through most of the season before the Week 11 loss to Detroit. With nine catches for 100 yards, Robinson had his most productive game to date, and logged a snap share above 70% for the second consecutive week.

The Kentucky alum’s starting role – which some felt before the regular season began would come right away amidst the Giants’ uncertainty at the position – seemed to be confirmed by October given his level of play and New York’s handling of other pass-catchers. That has included a distinct lack of playing time for high-priced signing Kenny Golladay and a trade sending 2021 first-rounder Kadarius Toney to the Chiefs.

Long before that deal had been made, the Giants were reported to be on the lookout for receiver acquisitions. None have been made during what was expected to be a rebuilding season and where the team has been hamstrung by an unenviable cap situation. Robinson joins veteran Sterling Shepard as victims of torn ACLs this season, leaving the Giants even more shorthanded at the skill positions.

Veteran Darius Slayton – who was long a trade and cut candidate this offseason, and hardly played at the start of the year – has taken on a starting role in recent weeks; that will likely continue moving forward. ESPN’s Jordan Raanan tweets that Richie James is expected to take over in the slot in Robinson’s absence. If anything, this injury should increase the Giants’ pursuit of free agent Odell Beckham Jr. New York and Dallas appear to be the two finalists to land the three-time Pro Bowler, who is expected to make a decision by the end of the month.

Even with Robinson’s contributions, the Giants rank 28th in the league with an average of 195 passing yards per game. That figure will now be in jeopardy of falling, especially if a reunion with Beckham fails to materialize. A resurgent Saquon Barkley has helped the team to a 7-3 record, of course, but the team’s run game will face even more pressure to perform with another important wideout sidelined for the remainder of the campaign.

Kadarius Toney did not make the trip to London with his Giants teammates, and Brian Daboll offered another discouraging update regarding the 2021 first-round pick’s status. Toney is battling a new injury, with Daboll indicating the reason he did not make the trip is due to a Wednesday tweak of his previously non-injured hamstring (via SNY’s Connor Hughes, on Twitter). Toney is now dealing with injuries to both his hamstrings, and ESPN.com’s Jordan Raanan adds (via Twitter) the shifty wideout said the hamstring issue he entered the week with was different from the one that plagued him this offseason. That would add up to three hamstring problems since camp.

Toney has yet to sustain a serious injury as a pro, but he has fast become one of the league’s most unavailable players. Quadriceps and oblique injuries sidelined him for seven combined games last season, and an ankle malady forced him out of another game. Toney missed much of last year’s training camp with a hamstring injury and underwent a knee scope this offseason. The Giants’ current regime is souring on the Dave Gettleman-era investment, who is signed through 2024.

The Giants will be without Toney, Kenny Golladay and Wan’Dale Robinson against the Packers in London. The second-round rookie, who has not played since Week 1, will likely be out again. While Golladay will almost certainly not be part of next year’s Giants team, it is worth wondering if Toney will be. Here is the latest from the NFC East:

Early in its Week 1 matchup against the Cardinals, Kansas City watched their kicker get carted off the field after Harrison Butker slipped on the kickoff following the team’s opening scoring drive, according to ESPN’s Field Yates. The injury brought on speculation that Chiefs safety Justin Reid may be forced to step in for kicks.

Fortunately, Butker’s injury wasn’t serious enough to keep him permanently out of the game as the sixth-year kicker made his way back onto the field at the end the second half to attempt (and convert) a 54-yard field goal. Still, the Chiefs did play it safe with Butker, calling on Reid to attempt two extra points following Butker’s slip. Reid was successful on his first extra point attempt but missed his second, likely leading to Butker’s return on the field.

Butker kicked the extra points for the remainder of the game, but Kansas City did elect to hold him off the field for kickoffs, letting Reid serve as the kickoff specialist for the rest of the day.

Here are a few other injury notes from around the first week of NFL games, starting with today’s matchup down by South Beach:

The Giants will not go into training camp with any unsigned rookies. They became the latest team to round out their draft class deals Monday, signing both second-round wide receiver Wan’Dale Robinson and fourth-round safety Dane Belton.

Chosen in what became a gray area, thanks to the guarantees in the No. 37 overall pick Jalen Pitre and No. 44 choice John Metchie‘s Texans contracts earlier this offseason, Robinson represents the latest early-second-round pick to sign. Eleven second-rounders remain unsigned. This year’s No. 43 overall choice will vie for playing time in a crowded Giants wideout situation.

Although Big Blue’s receiver setup is currently jampacked, Robinson profiles as the safest bet to stay with the team into the mid-2020s. The Giants roster Sterling Shepard, Kenny Golladay, Kadarius Toney and Darius Slayton. But Robinson is the only member of this intriguing wideout quintet to be brought in by the Joe Schoen–Brian Daboll regime. Slayton has become a trade candidate, while Shepard restructured his deal to stay for a seventh season. The longest-tenured Giant is now set to be a 2023 free agent. Golladay underwhelmed after signing a four-year, $72MM deal in 2021, and unavailability has been Toney’s defining NFL trait thus far.

Robinson zoomed onto the second-round radar after a 104-catch, 1,334-yard, seven-touchdown 2021 season at Kentucky. The 5-foot-8 slot player had been a Wildcats contributor during his underclassman years, but 2021 brought a breakthrough. Even without the Giants’ offseason injury issues at receiver and Slayton’s potential preseason departure, Robinson should be expected to have a steady role as a rookie. Both he and Belton are now signed through 2025.

The Giants are less situated at safety, giving Belton an interesting opportunity. The team cut Logan Ryan and allowed Jabrill Peppers to sign with the Patriots this offseason, leaving some uncertainty opposite Xavier McKinney. Julian Love is tentatively expected to start alongside the former second-round pick, but Belton — a first-team All-Big Ten player last season — will have a say in that plan during camp. As a junior at Iowa, Belton intercepted five passes in 2021. That tally tied for the second-most in the conference last season.

Here is how the Giants’ draft class looks ahead of camp: