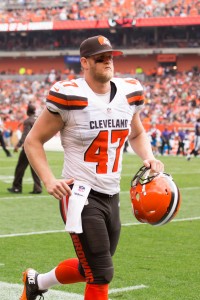 As teams prepare for the final weekend of the 2014 regular season, we’ll round up Wednesday’s minor roster moves in this space, with the latest transactions added to the top of the list throughout the day:

MONDAY, 3:56pm: Browns rookie quarterback Johnny Manziel will not be available for the last game of the season against the Ravens, according to Tony Grossi of ESPNCleveland.com (via Twitter). Manziel injured his hamstring in last week’s loss to the Panthers, and the injury would have reportedly forced him to miss a few weeks had this not been the last game of the year.

The team’s other quarterback option with experience is Brian Hoyer, who started for most of the season before being benched for Manziel. His status for Sunday’s game is uncertain due to a shoulder injury as well, which could leave the Browns without their two top quarterbacks.

The next option is undrafted rookie Connor Shaw, who the team signed after the draft this season. The former University of South Carolina quarterback is expected to get the lion’s share of the reps with the first team in practice this week in anticipation of the matchup with Baltimore (via Twitter).

According to Grossi, the team is also considering bringing in a quarterback from outside the organization, to serve as a backup under the circumstance where Hoyer cannot dress for the game. Grossi expects that the team will bring Rex Grossman in as an emergency option for Week 17 (via Twitter).

Grossman played under Kyle Shanahan for years, first with the Texans as a backup and also during their time together in Washington. Grossman was also with the team for a few weeks this August, and should have some comfort level, if not familiarity, with the offense.

Browns coach Mike Pettine was asked about the prospect of bringing in Grossman, and was noncommittal but noted that the team was exploring their options, according to Nate Ulrich of the Akron Beacon Journal (via Twitter). Pettine said he would get together with general manager Ray Farmer and they would look into how to proceed.

We’ll round up Friday’s minor transactions from around the NFL, including practice squad signings and cuts, in this space, with the latest moves added to the top of the list throughout the day:

As usual, we expect plenty of Wednesday practice squad moves, as teams around the NFL add and subtract from their respective units in preparation for Week 13 action. Here are the latest practice squad signings and cuts:

After having been released by the Bears earlier this week to make room for Marquess Wilson, wide receiver Santonio Holmes passed through waivers unclaimed and is on the lookout for a new job. And according to Mike Florio of Pro Football Talk (via Twitter), the veteran wideout has already paid a visit to Kansas City to meet with the Chiefs, a team that could use a receiver — through nine games, no Chiefs wide receivers have a touchdown this season.

While we wait to see if Holmes ends up signing with Kansas City or another club, let’s round up a few more Saturday updates on free agent visits, workouts, and auditions around the league….

The Broncos were expected to be one of the best teams in the NFL coming into the season after winning the AFC in 2013. They brought back most key components of a record-breaking offense, but the difference this year is on the defensive side of the ball, writes ESPN Insider Aaron Schatz.

The newfound strength of the defense has been with a few offseason additions. The team signed Aqib Talib, T.J. Ward, and DeMarcus Ware, and selected Bradley Roby in the first round of the NFL Draft. The defense has been far improved with these new players.

Here are some other words from around the AFC West:

Bills running back C.J. Spiller is off to a slow start this season, having averaged a career-worst 3.4 yards per carry and failed to reach the end zone so far. However, as he looks to turn things around, Spiller insists that his looming free agency isn’t what’s affecting his performance.

“It has nothing to do with this being the final year of my contract,” Spiller said, according to Jay Skurski of the Buffalo News. “It’s just overthinking and trying to make that play when I should have just taken what they’re giving us … and kept us out of the negative plays.”

Spiller has also been the subject of trade rumors and speculation, but tells Skurski he’s been able to block out that talk. Although the former first-round pick would adjust to a new team if Buffalo decides to move him and recognizes that’s “part of the business,” he says he wants to remain a Bill going forward.

With practices resuming following the weekend’s games, and teams having a better of idea of how serious its players’ injuries are, Tuesdays are often a busy day for practice squad transactions, as clubs replenish their rosters and swap in players at potential positions of need. As such, we expect to update this post plenty of times throughout the day, with the latest news of practice squad signings and cuts from around the NFL. Here’s the latest: