On their final offensive play of last night’s game, one of the Giants’ most important players saw his final action of the 2022 campaign. Wideout Sterling Shepard suffered a non-contact knee injury which was immediately expected to be season-ending (Twitter link via ESPN’s Jordan Raaanan). It has since been confirmed by head coach Brian Daboll that he tore his left ACL. 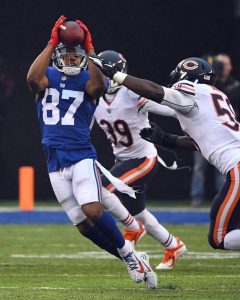 Shepard fell to the ground despite not being touched by a defender; he was ultimately carted off the field. The diagnosis marks the second consecutive major injury he now has to recover from.

The 29-year-old suffered a torn Achilles last December, so news that yesterday’s injury is season-ending is a major blow for him. The Giants’ longest-tenured player, Shepard has battled an number of ailments throughout his career, and has played a full season just twice in his seven years in the NFL.

When on the field, the Oklahoma product has proven himself to be a reliable contributor in the pass game, though. Starting all but three contests to date, he has reached or eclipsed 65 catches in a season three times, recording between 576 and 872 yards from the years 2016-2020. He had once again been a mainstay this year, logging starter’s snaps in all three contests while registering 24 receptions, 154 yards and one score.

In his absence, New York’s situation at WR could become the subject of even more scrutiny. 2021 first-rounder Kadarius Toney sat out yesterday’s contest due to a hamstring injury, the latest in a long line of ailments which have defined his young career. Kenny Golladay, meanwhile, has been at the center of trade speculation given his reduced role under the team’s new coaching staff and front office. Either of those two could see an increase in playing time with Shepard sidelined for the year; the team also has Darius Slayton and rookie Wan’Dale Robinson at the top of the depth chart, along with David Sills, who has taken many of Golladay’s reps.