The Bears’ passing game has been the league’s worst so far, and it will be shorthanded for the time being. The team announced on Tuesday that wideout Byron Pringle has been placed on IR. As a result, he will be sidelined for at least the next four weeks. 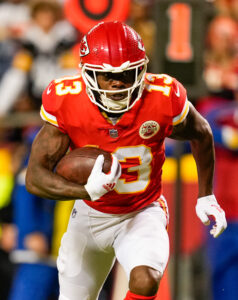 Pringle injured his calf during Sunday’s game against the Texans. He made one catch in the game, only his second of the season as he begins his tenure in Chicago, the team which ranks last in the league with an average of only 99 passing yards per game.

The former UDFA spent the first three years of his career with the Chiefs. He saw an increased workload with each passing season, culminating in a 49% snap share last year. With the increased opportunity, Pringle put up carer-highs across the board, totaling 568 yards and five touchdowns on 42 catches. In free agency, he followed new Bears general manager Ryan Poles to the Windy City on a one-year, $6MM deal.

This marks the second significant injury Chicago is dealing with at the position. N’Keal Harry, whom the team traded for from the Patriots in July, is still on the mend from the ankle surgery he underwent last month. He was initially expected to miss at least the first two months of the season, so the Bears are likely to be without two of their top pass-catchers for the foreseeable future.

In their absence, Chicago will lean more heavily (inasmuch as the team’s low-volume passing attack will allow) on the likes of No. 1 Darnell Mooney, fellow free agent signing Equanimeous St. Brown and third-round rookie Velus Jones Jr. With the spot opened up by the move, the Bears signed linebacker Joe Thomas to the 53-man roster from their practice squad. He appeared in Sunday’s contest after being a game-day elevation, seeing action both on defense and special teams.