Bills Could Be Stuck With Tyrod Taylor’s Salary

Tyrod Taylor is having sports hernia surgery today and his medical situation could complicate things for Buffalo this offseason. It seems unlikely that the Bills will want to move ahead with Taylor’s contract, which would call for $27.5MM in salary for 2017. However, if the Bills cut him while he’s injured, the union would argue that he’s entitled to his pay for next season, Albert Breer of The MMQB tweets. 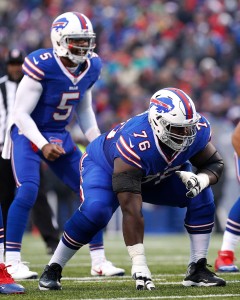 The Bills must wait until Taylor is healthy before cutting him and it’s not a given if he’ll be healthy by March 12th, when his $15.5MM option bonus is due (link). Once that option bonus is paid, Taylor’s $12MM base salary also becomes fully guaranteed. All in all, that adds up to $27.5MM for a quarterback that Doug Whaley & Co. do not necessarily want.

We don’t know for sure that the Bills will decline their pricey option on Taylor, but all signs have been pointing to a divorce for the last month or so. The ouster of Rex Ryan, Taylor’s biggest advocate, was the first indication that there would be a shakeup under center. Shortly after Ryan’s firing, Whaley favorite EJ Manuel was named as the team’s starter for Week 17. Then, this morning, the team released an oddly-phrased statement regarding Taylor’s operation that seemed to point at some major discord between the two sides [emphasis ours]:

“Taylor had a consultation visit yesterday with Dr. William Meyers and elected to have surgery this morning,” the statement read. “The Bills were informed late yesterday of this morning’s procedure.”