The Vikings have agreed to a re-worked contract with Phil Loadholt, per Darren Wolfson of 5 Eyewitness News (on Twitter). Loadholt will earn a $2MM base in 2016 and can make up to $3.5MM through incentives. A source close to Loadholt tells Chris Tomasson of the Pioneer Press (link) that the tackle is “betting on himself” to come back strong after having injuries in 2015, hence the one-year deal. 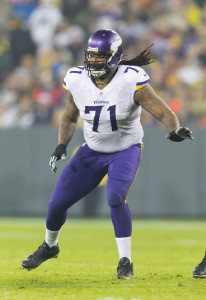 Loadholt missed only one game from 2009-13 but injuries have slowed him down in a major way ever since. The 343-pounder missed the final five games of the 2014 campaign because of a torn pectoral muscle and missed all of 2015 with a torn Achilles. Loadholt, 30, hasn’t played a 16-game season since 2012, but he suited up for 15 contests in 2013 and graded out as a top-five tackle by Pro Football Focus’ standards.

In other Vikings news, the team announced that they have tendered an offer to Zach Line. The team will now have first right of refusal on the fullback. Minnesota has also re-signed two ERFAs. Wide receiver Adam Thielen and tackle Carter Bykowski will be back with the club in 2016.

TUESDAY, 9:10am: The Vikings are now down to 75 players, having waived/injured quarterback Mike Kafka, according to the team (Twitter link). He’ll land on the team’s injured reserve list if he clears waivers.

MONDAY, 2:13pm: The Vikings have announced two more moves today, removing another two players from their active roster. According to a team release, Minnesota has waived/injured tackle Carter Bykowski, who will be out for the year with a pectoral injury, and placed cornerback Josh Robinson on the reserve/PUP list, meaning he’ll miss at least the first six weeks of the season.

They currently have 78 men on the roster, and will need to cut an additional three players in time for the Tuesday deadline.

Just days after placing starting right tackle Phil Loadholt on injured reserve with a season-ending Achilles injury, the Vikings confirmed that another tackle, Carter Bykowski will also miss the 2015 season. As Master Tesfatsion and Chris Miller of the Star Tribune detail, Bykowski will be out for the year after undergoing surgery for a torn pectoral muscle.

Bykowski hadn’t been expected to see significant action for the Vikings this season, with Matt Kalil and rookie T.J. Clemmings penciled in as the starters at left and right tackle respectively. However, with Loadholt sidelined, Bykowski, who was plucked from the 49ers’ practice squad by Minnesota last December, slid up a spot on the team’s depth chart, and may have been the next man up if Kalil or Clemmings had gone down.

Now, with their ranks thinning at offensive tackle, the Vikings will be on the hunt for more bodies at the position. The club signed former Giants and Cowboys tackle Stephen Goodin on Tuesday, and head coach Mike Zimmer suggests he’ll get an opportunity to earn a roster spot, but Minnesota will continue to pursue possible upgrades.

“He’s just another athlete to come in here and help,” Zimmer said of Goodin. “We’ll give him a look and see. We’re going to continue to look.”

Currently, the only tackles listed on the Vikings’ depth chart behind the starters are seventh-round rookie Austin Shepherd, raw Polish newcomer Babatunde Aiyegbusi, and Goodin.

As NFL teams get their 53-man rosters in order for Week 15’s slate of games, we’ll round up Wednesday’s minor transactions in this space, with the latest moves added to the top of the list throughout the day: