Eli Penny is sticking with the Giants. The organization agreed to a two-year deal with the fullback, according to ESPN’s Jordan Raanan (via Twitter). The 26-year-old was set to become a restricted free agent. 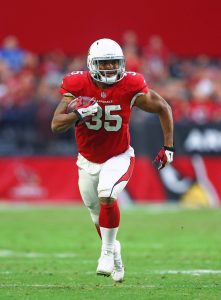 Penny, the older brother of Seahawks running back Rashaad Penny, was an undrafted free agent out of Idaho in 2016. After serving as a running back in college, he spent the first two-plus seasons of his career as a fullback with the Cardinals. He got into 16 games with Arizona in 2017, compiling 124 rushing yards and two scores on 31 attempts. He also added two receptions and 12 special teams tackles.

He joined the Giants during the 2018 campaign, and he’s spent the past season-plus with the organization. That includes a 2019 campaign where he appeared in 16 games and contributed 39 rushing yards.

Penny will once again be serving as the lead blocker for Saquon Barkley and Wayne Gallman in 2020.

The Giants have been very quiet in free agency so far, but they’re bringing back one of their own. The Giants have re-signed fullback Eli Penny, according to a team announcement. Penny was signed off the Cardinals’ practice squad in September and appeared in the team’s final 14 games of the season.

Penny was an undrafted rookie out of Idaho back in 2016. He spent his entire rookie season on the practice squad, then made the 53-man roster as a sophomore. He played a meaningful role in the offense that year, rushing for 124 yards and two touchdowns on 31 carries.

In his time with the Giants last season, Penny racked up 25 yards on seven carries and added eight receptions for 50 yards. All told, he played around 12 percent of the team’s offensive snaps. Assuming New York decides to carry a fullback on the final 53-man roster, Penny will be back to help block for Saquon Barkley next year.

The Giants are signing fullback Elijhaa Penny off the Cardinals’ practice squad, a source tells Jordan Raanan of ESPN.com (on Twitter). The move comes after Giants fullback Shane Smith struggled badly on Sunday night, so Smith’s time with the G-Men could be coming to an end.

Penny, a 25-year-old running back/fullback, appeared in all 16 games for Arizona last year. He finished out with 31 carries for 124 yards (a 4.0 yards-per-carry average in a small sample) and added four catches for 38 yards. Penny did not make the Cardinals’ final cut this year, but he was signed to their practice squad after clearing waivers.

The Giants fell to 0-2 after losing to the Cowboys on Sunday. They’ll look to get into the win column this weekend when they face the Texans in Houston.