Here’s a couple transactions we missed from earlier in the week:

The Broncos promoted cornerback Brendan Langley from the practice squad on Wednesday. The 2017 third-round pick did not make the team’s initial cut this year, but he may finally be on the verge of making his 2018 debut. 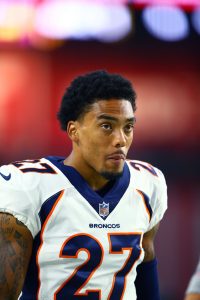 Langley, a converted wide receiver out of Georgia, did not make the 53-man roster in September even after the Broncos parted ways with Aqib Talib. The arrival of Adam Jones had something to do with that, but a spot opened up for the youngster when Pacman was cut loose this week.

Langley didn’t have the best camp or preseason in Denver. In four preseason games, Langley allowed five catches off of seven targets and his covered man averaged 15 yards per reception in that admittedly small sample. On the plus side, he did show some skills on special teams, and he has apparently impressed the Broncos in practice.

The 4-6 Broncos are fighting to keep their slim playoff hopes alive, but they’re also evaluating players for next year’s roster. This could be Langley’s chance to make a strong impression on team brass and punch his ticket for next year’s squad.

Entering his 12th season with the Chiefs, Tamba Hali‘s role might be closer to a part-time position when compared to his near-decade run as a consistent presence on Kansas City defenses. The team has Justin Houston healthy and Dee Ford back after a breakout season. Hali took to Twitter to address his status with the Chiefs, firing up a string of tweets shaped around his lack of usage in January’s divisional-round loss to the Steelers (Twitter links). The 33-year-old was not happy playing just seven plays and tweeted, “Am I needed in KC anymore?”

Hali added (on Twitter) he was told his minimized play was to preserve him for the playoffs, which is interesting considering the Chiefs were in an elimination game. But Ford and Houston were the team’s primary linebackers that night. Terez Paylor of the Kansas City Star, noting the tweets’ authenticity, pointed out how the outside linebacker kept quiet about this for a while but has obviously been upset about his lack of playing time in the Chiefs’ biggest game in 13 years (Twitter links). Paylor adds (on Twitter) Hali is not believed to be upset about being tied to the Chiefs but wants a prominent role.

A 2006 first-round pick, Hali is now on his third Chiefs contract — a three-year, $21MM pact — and that deal being backloaded inflates his cap charge from $3.8MM in 2016 to $8.6MM this season. Kansas City incurring a dead-money penalty of $8.91MM in the event of a 2017 Hali release makes that almost certainly a non-starter for a team up against the cap. But in 2018, the Chiefs can cut Hali and save $7MM. Ford’s salary also rises north of $8MM in 2018 due to the Chiefs exercising his fifth-year option. A five-time Pro Bowler whom Pro Football Focus rated as a top outside linebacker as recently as 2015, Hali started in front of slower-developing Ford in 2014 and ’15 but ceded ground as last season progressed and Houston returned.

However, the team could probably benefit from Hali as a part-time pass rusher, as several teams have from aging stalwarts in recent years. But his usage rate could be a point of contention, if Saturday’s string of posts is any indication.

Here’s the latest out of Kansas City and the rest of the AFC West.