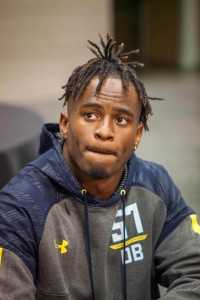 [RELATED: Which AFC North Team Had The Best Offseason?]

In 2017, the Browns traded up with the Broncos in order to select the Houston standout. The 6’1″ defender missed the bulk of his 2015 collegiate season with a torn ACL, but came back strong in ’06 as he intercepted five passes. After three serious knee injuries in four years, Wilson’s football future is in flux.

Fortunately for the Browns, they are not short on options at cornerback. The Browns’ revamped secondary will see free agent pickup T.J. Carrie start opposite of first-round pick Denzel Ward with newcomers E.J. Gaines and Terrance Mitchell among those in support at cornerback.

It turns out that the injury to Browns defensive back Howard Wilson is not as bad as initially feared. His partially fractured kneecap was initially believed to be a season-ender, but a source tells Ian Rapoport of NFL.com (on Twitter) that he’ll need only three or four months to recover. With that in mind, there’s a chance that he could suit up for the Browns midseason.

The Browns selected Wilson in the fourth round and he was widely projected to play a key role as a reserve corner. Shortly after he went down, the Browns rushed to sign veteran cornerback Jason McCourty. When considering that Wilson is going to still be out for a while and the Browns did not make any other major changes to the CB group, the McCourty signing still looks like a prudent move.

Wilson has now suffered two serious knee issues in the past three years. In his sophomore season at Houston, he suffered a torn ACL. In 2016, Wilson bounced back as he appeared in 12 games and registered 54 tackles with five interceptions.

The top cornerback investment the Browns made this offseason, Howard Wilson will be out a “significant” amount of time after fracturing his patella Friday, Mary Kay Cabot of cleveland.com reports (on Twitter). The injury occurred on the first day of the team’s rookie minicamp.

Cleveland selected Wilson in the fourth round. He was projected to play a potentially key role as a reserve corner. Now, Wilson could be out for the season, although the team is holding out hope the severe injury won’t erase his rookie campaign, Cabot tweets. The Browns confirmed Wilson will undergo surgery and miss time during the 2017 season.

This marks the second severe knee injury in the past three years for Wilson, who saw his sophomore slate at Houston end after three games due to a torn ACL. Wilson already signed his rookie contract.

The Browns traded up with the Broncos to No. 126 for the right to draft Wilson. The 6-foot-1 defender intercepted five passes in 2016 and represented some of the Browns’ depth at this position, along with second-year players Briean Boddy-Calhoun and Trey Caldwell.

Browns Acquire No. 126 From Broncos

The Browns have acquired the No. 126 pick from the Broncos, tweets Mike Klis of 9News. Cleveland will select cornerback Howard Wilson (Houston).