The Browns will waive tight end Rico Gathers, according to ESPN’s Tony Grossi (on Twitter). Gathers was suspended for the first game of the season, but the Browns did not feel the need to drop someone else on the 53-man roster to bring him back into the fold for Week 2.

The Browns picked up Gathers off waivers from the Cowboys in August, giving them a potential depth option behind starter David Njoku. The former Baylor basketball player has upside, but he’s yet to really do much at the pro level.

The league’s other 31 teams will have an opportunity to pick up Gathers on the waiver wire over the next 24 hours or so. If Gathers clears waivers, he’ll be free to sign with any team.

The Browns have signed TE Rico Gathers, as Mark Kay Cabot of Cleveland.com reports (via Twitter). In a related move, the club has waived FB/TE Orson Charles.

The Cowboys waived Gathers last week, and Cleveland is taking a low-risk gamble on Gathers’ athletic upside. Dallas selected the former Baylor basketball player in the sixth round of the 2016 draft, but Gathers spent his entire rookie campaign on the practice squad and the entirety of his second professional season on IR.

He finally saw regular season action last year, and though he appeared in 15 games (four starts), he caught only three passes for 45 yards. With Jason Witten back on the team and fellow tight ends Blake Jarwin and Dalton Schultz ahead of Gathers on the depth chart, the Cowboys decided to cut ties.

But the Browns have very little depth behind starter David Njoku. Though Gathers will be suspended for the first week of the season due to a violation of the league’s substance abuse policy, he should have a chance to earn meaningful playing time in Cleveland.

Charles, 28, appeared in 13 games and made two starts for the Browns in 2018. He saw action on 173 offensive plays, the most snaps he had played since his rookie campaign with the Bengals in 2012

The Cowboys are ending their Rico Gathers experiment. The team made the decision to waive the former Baylor basketball player-turned-tight end on Monday.

Gathers received a one-game suspension earlier this offseason. Although Gathers saw action in just 15 games in one season (2018), the 25-year-old spent four offseasons with the Cowboys. Dallas drafted Gathers in the 2016 sixth round and attempted to develop him. Gathers finished last season with three receptions for 45 yards.

An ankle injury limited Gathers during his fourth Cowboys camp, and the Dallas tight end situation obviously changed in recent months. Jason Witten is now back on the team; Gathers did not see any game action during Witten’s previous run with the team.

Younger tight ends Blake Jarwin and Dalton Schultz are expected to make the Cowboys’ 53-man roster, leaving Gathers without a surefire role. Prior to the Cowboys investing a sixth-round pick in the college hoops standout, Gathers had not played organized football since middle school.

Cowboys tight end Rico Gathers has been suspended for the first game of the 2019 season, per Jon Machota of the Dallas Morning News (Twitter link).

The suspension was for violating the league’s substance abuse policy. As Ian Rapoport of NFL Network pointed out in a tweet, the suspension stems from his 2018 arrest for marijuana possession. Gathers is battling for a roster spot right now, and this certainly won’t help his cause. Machota writes that Gathers is “currently the No. 4 TE on Dallas’ depth chart,” so his spot on the 53 seems tenuous at best.

The Cowboys currently have Jason Witten, Blake Jarwin, and Dalton Schultz ahead of him in the pecking order. A sixth round pick in 2016, Gathers has received some offseason hype in the past, but hasn’t done much in the regular season. Gathers is heading into the final year of his rookie deal, and is scheduled to make a base salary of only $570K, which could end up saving him.

There was talk last offseason that Gathers could play a big role for the Cowboys in the wake of Witten’s retirement, but he ended up serving mostly as a blocker. He was listed as starting four games, but ended up catching only three passes for 45 yards. A Baylor product, Gathers missed the entire 2017 season due to injury. He might not be the only Cowboy suspended this summer, as the league is reportedly investigating Ezekiel Elliott‘s latest situation.

Rico Gathers hasn’t helped his case to make the Cowboys roster. The tight end was arrested and charged with possession of marijuana last night, according to ESPN’s Todd Archer.

Police say they found Gathers in possession of less than two ounces of marijuana. The 24-year-old was released from jail this morning after posting bond. Marijuana possession is a violation in Texas (where Gathers was arrested), and he could be subject to the NFL’s substance-abuse policy.

Despite not having played football since the eighth grade, the Cowboys selected the 6-foot-8 Gathers in the sixth round of the 2016 draft. The Baylor basketball player has the athleticism to play football, but he hasn’t been able to put it together during his tenure in Dallas. The tight end has yet to appear in an NFL regular season game.

Gathers was already going to have a tough time making the Cowboys roster. He hauled in 10 passes during the preseason, but he was still listed behind behind Geoff Swaim, Blake Jarwin and rookie Dalton Schultz on the depth chart.

Jason Witten To Return In 2018

Following the Cowboys’ 6-0 win over the Eagles on Sunday, tight end Jason Witten announced he would return for his 16th season in 2018, ESPN’s Todd Archer reports. 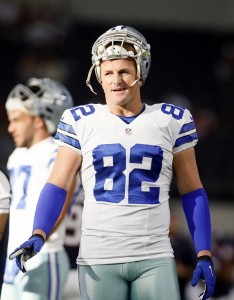 Witten was expected to return but left open the possibility of retiring in recent weeks. “I’m coming back. I love playing this game too much and I know that I can play it at a high level,” he said. After the University of Tennessee fired its head coach in 2017, Witten’s name appeared in coaching rumors but the tight end quickly shot down the reports.

Archer notes that Witten will become the longest-tenured member of the Cowboys in franchise history, surpassing Mark Tuinei, Ed “Too Tall” Jones and Bill Bates who each played 15 seasons.

Witten is signed through the 2021 season after signing a four-year extension in March. However, he has contemplated retirement each of the last two seasons. He finished the season with 63 receptions for his 14th consecutive 60-catch season.

Behind Witten on the depth chart, the Cowboys do have a promising talent in Rico Gathers, who played basketball at Baylor before being selected by Dallas in the 2016 NFL Draft. Gathers was placed on the practice squad in 2016, and enjoyed a breakout preseason in 2017 but was placed on injured reserve with a concussion.