The NFL will likely review Ezekiel Elliott‘s Las Vegas incident to determine whether he violated the terms of previous suspension guidelines, Charles Robinson of Yahoo Sports hears. Elliott, who was banned for six games for alleged acts of physical abuse against an ex-girlfriend, could theoretically be hit with another suspension from the league office. 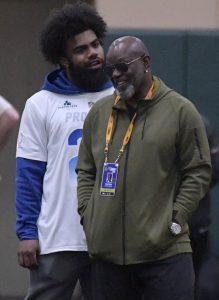 When asked about Elliott’s latest issue last week, Cowboys owner Jerry Jones told reporters, “I don’t see that having any consequences for us.” Jones may be outwardly confident, but Robinson hears the Cowboys believe that the running back has been unfairly put under a microscope by commissioner Roger Goodell.

Elliott was briefly handcuffed at a concert earlier this month after bumping a security guard and TMZ procured video of the incident. If the NFL finds that Elliott “threatened physical violence against another person,” that could spell trouble for the 23-year-old (24 in July).

Meanwhile, the Cowboys are discussing an extension with Elliott that would make him the league’s highest-paid running back.