Having added two notable free agents at the position, more change was likely inevitable for the Jets. It comes as little surprise, then, that the team announced on Monday the release of veteran tight end Ryan Griffin. 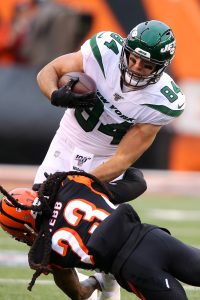 The 32-year-old was a sixth-round pick of the Texans in 2013. His role developed over the course of multiple years in Houston, peaking in 2016. During that campaign, he posted career-highs in receptions (50) and yards (442). Across six seasons with the Texans, he played in 77 games (including 36 starts), registering 1,491 yards and seven touchdowns.

In July 2019, Griffin signed with the Jets, who were short on experience at the position. He remained there for three campaigns, starting 31 of 42 games. The 2020 season saw him make only nine catches, but the years before and after were in line with his standard levels of production. Overall, he totalled 70 catches for 667 yards and seven scores in the Big Apple.

Releasing Griffin (who was under contract for one more season) will save the Jets just over $3MM. Regardless of the financial implications, New York had already re-vamped the depth chart at the position this offseason. The Jets signed C.J. Uzomah as well as Tyler Conklin as two of their early moves in free agency. With those two in place, Griffin will now hit the open market for the second time in his career as he looks for his next NFL home.

The Jets want Ryan Griffin to stay around. New York has exercised their 2021 option on the tight end, a source told Field Yates of ESPN.com (Twitter link).

Originally a sixth-round pick of the Texans in 2013, Griffin spent his first six years in Houston. He showed some flashes and had 442 yards in 2016, which earned him a three-year extension the following year. He played a little bit smaller role the next two seasons and was released in May of last year not long after he was arrested for punching a hotel window. The Jets scooped him up last summer, and he turned into a pleasant surprise for the team.

He ended up starting all 13 games that he appeared in for Gang Green, catching 34 passes for 320 yards and five touchdowns. The Jets were impressed enough to give him a three-year, $10.8MM extension in November of last year, which included this option year. Overall, he’s under team control through 2022. He’ll try to fend off third-year player Chris Herndon for the starting job in training camp.

Jets tight end Ryan Griffin has signed a three-year $10.8MM extension that includes $4MM in guarantees with the team, according to Mike Garafolo on the NFL Network. Manish Mehta of the New York Daily News was the first to report the agreement.

While Gang Green has failed to meet their expectations entering the season, Griffin has been one of the team’s bright spots. Griffin is far from an elite player at his position, but represents a solid rotational piece.

Originally drafted by the Texans in the 6th round of the 2013 NFL Draft. Griffin spent the first six years of his career in Houston averaging six starts a year and accumulating 1491 receiving yards, 136 receptions, and 7 receiving touchdowns. Griffin receive consistent playing time, but generally only after an injury.

Griffin signed a one-year, $1.125 MM contract this offseason with the Jets that included no base salary guarantees. Since joining the team, he quickly moved to the top of the depth chart and has started every game of the season. Griffin has caught a career-high four touchdown passes and has grabbed a total of 25 receptions for 269 yards.

Set to be without Chris Herndon for the season’s first month, the Jets added some experience Monday. The team and veteran tight end Ryan Griffin agreed to terms, per Brian Costello of the New York Post.

Following an arrest on charges of misdemeanor vandalism and public intoxication, the Texans released Griffin in May. The charges were later dismissed. Griffin, 29, will now have a chance to make an impact with a second franchise.

Griffin’s functioned as a part-time starter throughout his career, earning that distinction 36 times since debuting in 2013 after being a sixth-round Texans pick. He started a career-high 11 games for the 2018 Texans and, with Herndon set to be shelved on a four-game suspension, stands to have a decent chance at working with Jets first-stringers in September.

The Texans have released tight end Ryan Griffin, according to Field Yates of ESPN.com (on Twitter). Griffin was arrested last month in Nashville after allegedly punching a hotel window. 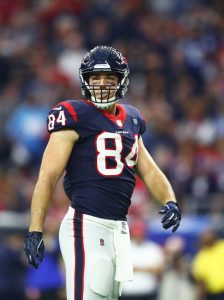 The incident occurred near the site of the NFL Draft and made headlines for the Texans at an inopportune time. Hotel security reported Griffin to police, and the tight end was subsequently arrested and charged with vandalism and public intoxication. The player was also reportedly bleeding from his left hand, although the extent of the injury is not clear. Instead of writing Griffin a citation, police decided to arrest the player “for his own safety.” The tight end was ultimately released from jail after paying his bond.

The 2013 sixth-round pick has spent his entire six-year career with the Texans, serving in mostly a backup role. His best season came in 2016, when he hauled in a career-high 50 passes. Griffin started a career-high 11 games (in 14 appearance) in 2018, compiling 24 receptions for 305 yards. Pro Football Focus wasn’t particularly fond of his performance last season, ranking him 56th among 70 eligible tight ends.

After selecting San Diego State tight end Kahale Warring in the third round and adding free agent Darren Fells this offseason, the Texans had little reason to keep Griffin. By releasing him, the Texans have brought an early end to the three-year, $9MM extension ($3.22MM guaranteed) he inked back in 2017.

Texans tight end Ryan Griffin was arrested last night in Nashville, according to a report from Tennessean.com.

Police say the 29-year-old punched a window at a hotel (which, notably, was located near the NFL Draft). Hotel security reported Griffin to police, and the tight end was subsequently arrested and charged with vandalism and public intoxication. The player was also reportedly bleeding from his left hand, although the extent of the injury is not clear. Instead of writing Griffin a citation, police decided to arrest the player “for his own safety.” The tight end was ultimately released from jail after paying his bond.

The 2013 sixth-round pick has spent his entire six-year career with the Texans, serving in mostly a backup role. His best season came in 2016, when he hauled in a career-high 50 passes. Griffin started a career-high 11 games (in 14 appearance) in 2018, compiling 24 receptions for 305 yards. ProFootballFocus wasn’t particularly fond of his performance last season, ranking him 56th among 70 eligible tight ends.

His underwhelming advanced metrics could (partly) explain why the Texans ended up selecting San Diego State tight end Kahale Warring in the third round last night. The team also added free agent Darren Fells this offseason, so there’s no guarantee that Griffin makes it to the regular season with his current squad. Griffin signed a three-year, $9MM extension ($3.22MM guaranteed) with the Texans back in 2017.