Browns running back Isaiah Crowell has signed his restricted free agent tender, according to his agents as Universal Sports Management (Twitter link). 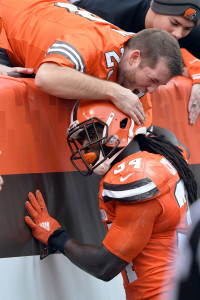 Because Crowell was tendered at the second-round level, he’s scheduled to earn a non-guaranteed $2.746MM base salary for the 2017 season. While Crowell reportedly drew interest as an RFA earlier this year, it was always unlikely another team would sacrifice a second-round pick in order to add a running back with limited results at the NFL level. Crowell didn’t attend early Cleveland workouts in April (perhaps in something of a mini-protest), but he’s now under contract and set to become an unrestricted free agent in 2018.

Crowell, 24, is coming off the best season of his three-year career, as he posted career highs in carries, rushing yards, and receiving yards while scoring seven touchdowns. He’ll return as the Browns’ lead ball-carrier in a backfield that also includes Duke Johnson Jr., George Atkinson, Darius Jackson, and seventh-round pick Matthew Dayes.