As expected, Isaiah Crowell is heading to the Raiders’ IR list. The Raiders made that move on Friday, the team announced. 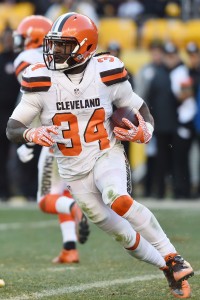 Crowell suffered an Achilles’ tendon tear while working out Tuesday. By virtue of Friday’s transaction, the sixth-year running back will miss the 2019 season.

The Raiders moved quickly to re-sign Doug Martin. Marshawn Lynch is open to returning as well, but he remains in free agency. Oakland is expected to position rookie Josh Jacobs as its starter. Attached to a second-round tender, Jalen Richard is on the roster as a passing-down option. Martin, who bounced back from two down years in becoming the starter after Lynch went down last season, figures to push for the backup job.

As for Crowell, this is obviously a tough blow. He saw the Jets cut bait on the parties’ three-year deal after one season, one in which he received a career-low 143 carries. While Crowell is just 26, Achilles tears are quite damaging to running backs’ careers.

Isaiah Crowell‘s season may already be over. During workouts on Tuesday, the new Raiders running back suffered an Achilles tear, according to Adam Schefter of ESPN.com (on Twitter).

Crowell is unlikely to suit up for the 2019 season, but as Mike Garafolo of NFL.com (on Twitter) notes, there have been some instances of players tearing their Achilles in the spring and managing to play in the same season. Michael Crabtree, for example, tore his Achilles in May of 2013 but managed to play in five regular season games and two playoff contests for the 49ers. Still, the early read from the Raiders’ medical staff is that Crowell won’t be able to suit up.

The Raiders signed Crowell to a one-year deal in late March, positioning him as one of Oakland’s top rushers. Instead, it now appears that first-round pick Josh Jacobs is slated for an even bigger role than anticipated. The Raiders also have Jalen Richard, Chris Warren III, and DeAndre Washington to help keep things moving following the retirement of Marshawn Lynch. Meanwhile, last year’s top rusher Doug Martin remains in free agent limbo.

The Raiders are set to sign former Jets running back Isaiah Crowell, a source tells Adam Schefter of ESPN.com (on Twitter). When finalized, it’ll be a one-year deal worth up to $2.5MM.

Crowell visited the Raiders on Thursday and it didn’t take long for a deal to come together. Crowell now has an opportunity to take over as the Raiders’ top running back with Marshawn Lynch and Doug Martin both in free agent limbo.

Head coach Jon Gruden has indicated that he would like to retain both Lynch and Martin, but he also said the same of tight end Jared Cook, who has since left to join the Saints. There’s also the draft to consider, so the returns of those two vets are far from guaranteed.

The Jets released Crowell earlier this offseason after his first and only campaign with the club. Crowell did well on a per-carry basis in New York, matching his career high with 4.8 yards per carry. But, the Jets gave the 2018 free agent acquisition a career-low 143 carries. Crowell, 26, finished with 685 yards and the Jets replaced him with Le’Veon Bell.

Crowell has 27 career rushing touchdowns and surpassed 850 ground yards in his final two Browns seasons, doing so despite the team often trailing in a 1-31 stretch. He might not be the sexiest name out there, but he could help to fortify the Raiders’ running game.

The Jets have released running back Isaiah Crowell, according to a team announcement. This was the expected move after the club inked Le’Veon Bell to be the new lead back.

We heard this was the plan back in February, and now the Jets are following through. Crowell, 26, matched a career watermark with 4.8 yards per carry last season. He also had six touchdowns on the ground plus 21 catches for 152 yards. While his season was fine on paper, it was a relative disappointment after the Jets signed him to a three-year, $12MM deal last offseason.

His numbers were somewhat inflated by one standout game, as 219 of Crowell’s 685 yards came against the Broncos in a brilliant Week 5 performance. New York ended up placing him on injured reserve with a few weeks to go last season, as he battled a toe injury.

Crowell will now enter a market without too many big-name running backs on it, and he should be able to find a new home relatively easily, although he likely won’t be receiving the $4MM per year he got from the Jets.

An undrafted free agent from Alabama State, Crowell started his career with the Browns and spent his first four years in Cleveland. He was always pretty productive, rushing for at least 600 yards in all four seasons, but for whatever reason the Browns never wanted to commit to him as their full-time running back.

Although Joe Flacco interrupted Antonio Brown‘s run as the NFL news cycle’s offseason centerpiece, the Steelers‘ drama with their superstar wide receiver remains the league’s top storyline. After Brown’s trade request, NFL executives believe there may be a significant gap between what the Steelers want to part ways with Brown (and take on a sizable dead-money chunk) and what other teams will pay. One NFL GM believes Pittsburgh, regardless of Brown’s age (31 in July) and off-field trouble, will still want a first-rounder, Jeremy Fowler of ESPN.com notes. Two other high-ranking execs said, via Fowler, Brown could fetch a Day 2 draft choice, while another predicted a fourth-round pick. Collecting a third- or fourth-round pick for a four-time All-Pro, while taking on more than $20MM in dead money, would be an incredible pill for the Steelers to swallow.

One team that may want Brown may not be able to acquire him, with Jason La Canfora of CBS Sports tweeting the Steelers will not trade him to the Patriots in addition to having a predictable stance on an intra-AFC North trade.

Free agency is less than a month away, but teams are making moves in preparation. Here is the latest on this front, along with other AFC news:

Defensive end Trey Flowers has been a solid contributor for the Patriots for the past three seasons, but as he enters his contract year, Flowers isn’t guaranteed to land an extension from New England, as Tom Curran of NBC Sports Boston writes. The Patriots, historically, haven’t been willing to invest much cap space in their defensive line, preferring to plug in low-cost veterans or rookies who excel at stopping the run. Chandler Jones, New England’s best edge rusher in recent memory, was traded to the Cardinals in exchange for a second-round pick, as the Patriots presumably had no interest in paying Jones market value. Flowers, 25 next month, played in roughly three-quarters of New England’s defensive snaps a season ago, far-and-away the most among Patriots’ defensive lineman. In that time, Flowers posted 45 tackles, 6.5 sacks, and graded as the league’s No. 14 edge defender, per Pro Football Focus.