The Buccaneers are getting a head start on roster cuts. The team has released defensive end George Johnson, Ian Rapoport of NFL.com tweets. 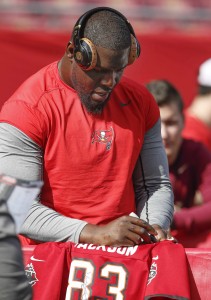 The move brings Johnson’s second stint with Tampa Bay to an end. In the process, the Bucs get themselves off the hook for his $2.25MM salary, which would have become guaranteed if he was on the roster for Week 1.

Unfortunately, the 29-year-old (30 in December) hasn’t seen the field since the 2015 season. Last August, an ACL tear shut him down for the year.

An undrafted free agent in 2011, Johnson originally signed multiple contracts early in his career with the Buccaneers, and spent parts of the next two seasons with the club. He was quietly effective in 2014, appearing in all 16 games for the Lions and earning a positive grade from Pro Football Focus (subscription required), largely thanks to his excellent pass-rushing acumen. In 2015, Johnson appeared in eleven games for the team, tallying 23 tackles and two forced fumbles.

Johnson’s release could bode well for defensive end Jacquies Smith making Bucs’ roster to start the year, Greg Auman of the Tampa Bay Times tweets. Smith has been on the PUP list throughout the summer.