The Buccaneers are reportedly bailing on a 2017 draft pick. According to NFL.com’s Mike Garafolo (via Twitter), the team has waived running back Jeremy McNichols. The rookie could theoretically pass through waivers and land on Tampa Bay’s practice squad. 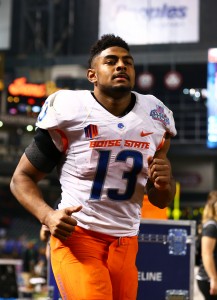 The Buccaneers used a fifth-round pick on the Boise State product, and he was expected to serve as a depth piece while the team awaited the return of suspended running back Doug Martin. However, the team was apparently content with Jacquizz Rodgers, Charles Sims, and Peyton Barber for the time being.

McNichols was one of the most productive collegiate running backs over the past two seasons. Between 2015 and 2016, the running back averaged 1,523 yards and 21 touchdowns per season. He also proved to be competent in the passing game, averaging 44 receptions for 321 yards during that same span.

The Buccaneers have also announced the following transactions: