Giants To Move DRC To Safety

Last fall, Dominique Rodgers-Cromartie‘s chances of staying with the Giants seemed slim. He is in the plans for the team’s new regime, but it’ll be at a different position. The Giants are moving Rodgers-Cromartie from cornerback to safety, Ian Rapoport of NFL.com (on Twitter) hears. This summer, he’ll compete with Darian Thompson for the starting job at free safety. 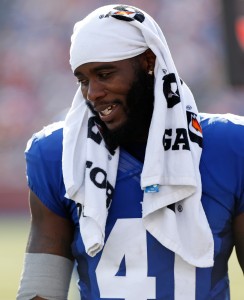 Cornerbacks don’t always take well to moving to safety, particularly those of DRC’s caliber. He says he’s on board with the plan, however, according to Kimberly Jones of NFL.com (on Twitter).

The Giants had an opportunity to get out from DRC’s contract this offseason. The 31-year-old (32 in April) is slated to carry an $8.5MM cap hit, but releasing him would save $6.5MM against the cap against just $2MM in dead money.

For now, it sounds like the Giants will stick with him at his current rate, but we have a long way to go between now and the start of the 2018 season. It would not be surprising to see the Giants to ask the veteran to accept a pay cut, nor would it be a shock to see them abandon the cornerback-to-safety plan altogether, either by keeping him at corner or releasing him outright. The Giants have $23MM in cap space, a mere pittance compared to other teams in the NFL, and multiple needs to address such as remaking the offensive line and finding a new lead running back.

Last year, Rodgers-Cromartie earned a 77.2 overall score from Pro Football Focus, his lowest showing since 2012. He graded out as the 58th ranked cornerback in the NFL, portraying him as someone who is on the fringe of starter quality. His on-field performance was the least of his issues, however. Rodgers-Cromartie clashed with former coach Ben McAdoo last week – apparently, on four separate occasions – before being suspended “indefinitely” for conduct detrimental to the team. He was brought back after just one game, but his outbursts were an indicator of a much deeper problem in the Giants’ locker room.

In 2016, he earned a career-best 89.9 mark from PFF and was as second team All-Pro by both PFF and the Associated Press. That’s the kind of performance the Giants are looking for as DRC shifts his focus to a new position.

2 comments on “Giants To Move DRC To Safety”