The “legal tampering” period before free agency doesn’t begin until March 12, but the Jets are already worried about losing out on their top target. The Jets are aware of league-wide speculation that the Vikings will sign Kirk Cousins and they are taking that talk seriously after engaging in “informal, preliminary talks with his camp this week,” Ralph Vacchiano of SNY hears. 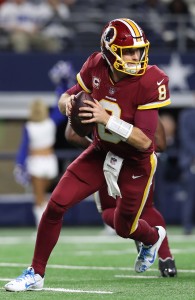 The Jets badly need a quarterback solution for 2018 and the Vikings, in theory, have three starter-quality signal callers to choose from. However, the Vikings are not comfortable with relying on Sam Bradford or Teddy Bridgewater and they apparently would prefer to give Cousins a record-breaking deal over a more modest contract for Case Keenum. The Vikings are not expected to use the franchise tag on Keenum and it’s not hard to connect the dots to Cousins.

Cousins is reportedly planning to not agree to terms with any club before the official start of free agency on March 14, but that may change with the right offer from Minnesota. It’s anyone’s guess as to whether Cousins would change course and agree to a back-channelled deal beforehand, but the Jets are aware – and nervous – about the possibility.

The Broncos and Cardinals are also reportedly among the “final suitors” for Cousins’ services.