The Kirk Cousins sweepstakes is quickly heating up. Earlier today, ESPN’s Adam Schefter reported (via Twitter) that there were four “final” teams vying for the quarterback’s services: the Broncos, Cardinals, Jets and Vikings. 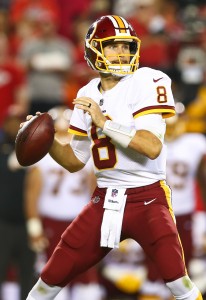 Denver, Minnesota, and New York have definitively been connected to Cousins for much of the offseason, but it’s mostly been speculation surrounding Arizona’s interest in the signal-caller. Following the retirement of Carson Palmer, the Cardinals currently aren’t rostering a single quarterback.

With the return of David Johnson and the presence of Larry Fitzgerald, Cousins would seemingly have an opportunity to flourish in Arizona. In a bit of an ironic twist, Cousins posted a picture of himself and Fitzgerald on Instagram yesterday, writing “Ran into Fitz in the airport yesterday. He’s a GREAT recruiter!” Unfortunately for the Cardinals, they’re currently operating with less cap space than the other three candidates.

Assuming these are indeed the final four teams vying for Cousins, the report seemingly takes several other potential suitors out of the mix. Primarily, the Browns, who are armed with $110MM-plus in cap space, seem to be out of the race for the quarterback.

Cousins had another productive season in 2017, completing 64.3-percent of his passes for 4,093 yards, 27 touchdowns, and 13 interceptions. We heard yesterday that the Broncos would be going hard after Cousins, while “rampant speculation” around the Combine projects that Cousins is ultimately going to Minnesota