Former Jets and Giants wide receiver Brandon Marshall is visiting the Seahawks, according to Jordan Raanan of ESPN.com (Twitter link). This marks Marshall’s first known visit since his release from the Giants in April. 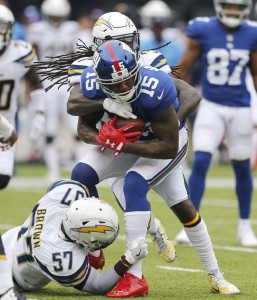 Marshall was one of several Giants receivers to go down with a serious injury in 2017. The veteran missed the missed the bulk of the year after undergoing ankle surgery in October. Without the services of Odell Beckham Jr. and Marshall, the Giants went into a tailspin and finished out with a 3-13 record last season.

Marshall topped 1,500 yards in his 2015 season with the Jets, but he has not been able to reprise that production in the last two years. In 2016, he had just 59 catches for 788 yards and three touchdowns, a big step back from the previous year in which he had a league-leading 14 TDs. Last year, he caught 18 passes for 154 yards in five games with zero TDs.

The Seahawks replaced Paul Richardson with Jaron Brown this offseason, but they could still use some additional firepower in their wide receiver group. Marshall would give the Seahawks a formidable top four of Doug Baldwin, Tyler Lockett, Marshall, and Brown, perhaps with the speedy Marcus Johnson rounding out the bunch.