The Titans are making moves this week. Quarterback Matt Cassel and wide receiver Eric Weems have been released, according to a press release from the team. They join running back DeMarco Murray and safety Da’Norris Searcy as recent Titans cap casualties. 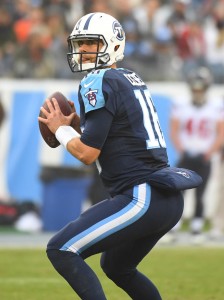 Cassell spent two years with the Titans as a backup to Marcus Mariota. He played sparingly and amassed a stat line of 446 yards with three touchdowns against four interceptions with a 59% completion rate. By cutting Cassel, the Titans will clear his entire $2.5MM cap hit from the books.

The release of Weems will free up $1.35MM for the Titans. Weems, 33 in July, was an expected cut this offseason. He served primarily as a deep reserve in 2017 with the occasional appearance on special teams.

Between all four cuts, the Titans have saved approximately $13MM heading into free agency.

The former Pro Bowler spent the past three seasons with the Falcons. After collecting career-highs in receptions (10), yards (102), and touchdowns (two) in 2014, Weems has mostly served as a return specialist over the past two years. The 31-year-old retuned 32 kicks for 794 yards (24.8 average) during that span. He also returned 43 punts for 494 yards (11.5 average).

Wide receiver Michael Crabtree spent the first six years of his career with the 49ers after they drafted him 10th overall in 2009. His time in San Francisco was somewhat underwhelming, given his production at Texas Tech and draft status, as he eclipsed the 1,000-yard plateau just once and never racked up double-digit touchdowns in a season. Crabtree stayed in the Bay Area and signed with Oakland during the offseason, but he told Vic Tafur of the San Francisco Chronicle that the 49ers wanted him back. The feeling wasn’t mutual.

Crabtree then took a shot at 49ers quarterback Colin Kaepernick, saying, “I needed a quarterback that can deliver the ball, and that was hungry like I was.”

FRIDAY, 4:33pm: The Falcons have reached an agreement with wide receiver and special teamer Eric Weems on a new two-year contract that will keep him off the open market, reports Vaughn McClure of ESPN.com (via Twitter). Weems had been eligible to become an unrestricted free agent.

Weems, who turns 30 in July, was a key special teams player for the Falcons in 2014, recording 12 tackles in kick and punt coverage. The veteran also played over 200 offensive snaps, and while he didn’t see a ton of targets, two of his 10 receptions on the season went for touchdowns. The Falcons also used to utilize Weems as kick returner, but he probably won’t be asked to resume those duties as long as Devin Hester is around.

Financial terms of the deal aren’t yet know, but I’d expect a fairly modest salary figures for Weems.

Here are Thursday’s minor transactions from around the NFL, with the latest moves added to the top of the page throughout the day:

TUESDAY, 9:57am: According to Field Yates of ESPN.com (via Twitter), Holmes’ deal is a minimum salary benefit contract, with no guaranteed money.

SATURDAY, 5:29pm: The Bears have officially announced the signing of Holmes, with Eric Weems being cut to make room on the roster for the former Jet (Twitter link).

9:49am: Veteran receiver Santonio Holmes has agreed to sign with the Bears, per ESPN’s Adam Schefter (via Twitter).

Holmes, 30, joins the Bears after four years with the Jets. Though he caught just 23 balls and one touchdown last season, he averaged nearly 20 yards per catch despite missing five games because of a pulled hamstring. Holmes also sat out 12 games in 2012 with a Lisfranc injury.

Holmes worked out for the Bears last week, as they’re in desperate need of a third receiver after Marquess Wilson suffered a broken clavicle. Holmes was one of the biggest “names” remaining on the free-agent scrap heap, but thanks to his age, injuries and character questions, he received just tepid interest as his free agency lingered into mid August.

The Jets were relieved to be rid of Holmes when they cut him in March, at which time the New York Daily News’ Manish Mehta wrote, “General manager John Idzik released the underachieving, injury-prone diva wide receiver Monday, capping a strange four-year journey sprinkled with malaprops, meltdowns and “misunderstandings.” In June, Holmes’ agent admitted teams were asking if his client is a “diva.” And recently, reports surfaced that the Browns passed on Holmes because they didn’t think his talent was worth the risk of him disrupting team chemistry.

Nevertheless, injury has opened the door for Holmes in Chicago, where Marc Trestman has shown the ability to get star players with unique personalities or coachability issues to buy in. If Holmes has gas left in the tank, he figures to have a realistic chance of playing a key role as a complimentary piece in a Bears offense loaded with talented skill players.