Chiefs assistant Dave Toub has been given a new title. Toub will continue as the team’s special teams coordinator while also serving as the club’s Assistant Head Coach. 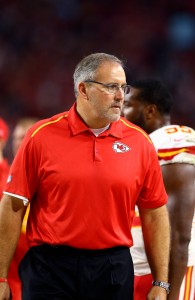 “Dave has had the opportunity to work with our team on both sides of the football, on the field and in the classroom,” Reid said. “His leadership qualities have entrusted me to promote him to Assistant Head Coach.”

Toub has been the team’s special teams coordinator since 2013. Since then, his name has surfaced as a possible head coaching candidate. The new title – and likely pay bump – may help the Chiefs to ward off other interested suitors down the line.

Since Toub has run KC’s special teams operation, the Chiefs have had ten special teams returns for touchdowns, the most in the NFL over that span. In 2013, they set a new NFL watermark in a single season with 29.9 yards per kick return. Before joining Andy Reid‘s staff, Toub worked with the Bears and Eagles.