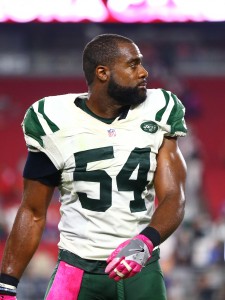 Corey Nelson‘s tenure with the Falcons has come to an end. The team announced that they’ve released the linebacker with an injury settlement. The team will promote linebacker Richard “Dewey” Jarvis from the practice squad to take the open roster spot.

Nelson, 26, signed with the Eagles this offseason, but he was cut by the organization prior to the regular season. He quickly caught on with the Falcons, and he appeared in a single game with the organization. The 2014 seventh-round pick out of Oklahoma spent the first four seasons of his career with the Broncos, including a 2016 campaign where he compiled 67 tackles and five passes defended in 16 games (five starts).

At the time of his signing, several of the team’s linebackers were struggling with injuries, but the grouping now appears to be relatively healthy. Of course, the Falcons could still be seeking some reinforcement at the position, even after the promotion of Jarvis. Including the rookie, the team is still rostering only five linebackers, a grouping that includes Duke Riley, De’Vondre Campbell, Kemal Ishmael, and Foye Oluokun.

Jarvis joined the organization as an undrafted free agent out of Brown. He initially earned a spot on the team’s active roster before being waived earlier this month (he subsequently caught on with the team’s practice squad). He had a solid preseason for the Falcons, compiling seven tackles and two sacks.

The Falcons have signed a whopping 27 undrafted free agents. Here is the full rundown:

Most NFL teams do not employ a fullback but the Falcons rostered one last year in Derrick Coleman, so McNitt and Marx may have a shot at making the team. At quarterback, there may be an opportunity for Benkert and Lamar Jordan to unseat Garrett Grayson as the third QB (assuming Jordan is being evaluated as a QB), though they are well set with Matt Schaub as the primary backup to Matt Ryan.

Benkert received a $60K guarantee to sign, Field Yates of ESPN.com tweets, so it’s clear that the Falcons think highly of him. Benkert started his collegiate career at East Carolina before transferring to Virginia for the 2016 season. In two years as Virginia’s starter, he completed 57.7% of his passes with 46 touchdowns against 21 interceptions.