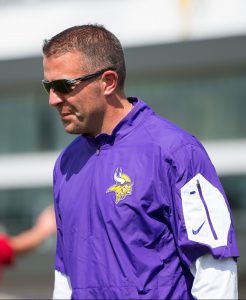 There were eye rolls around the football world when the Jaguars made contact with McCoy this week and there’s sure to be some eyebrow raises about their hiring of DeFilippo. DeFilippo was hailed as a quarterback whisperer in Philadelphia for his coaching of Carson Wentz and his ability to quickly get Nick Foles ready for primetime at the end of the 2017 season, but he flopped as the OC in Minnesota. The Vikings handed him a pink slip midway through the year as their Kirk Cousins-powered offense floundered.

DeFilippo will have his work cut out for him in Jacksonville. Many believe the Jaguars should move on from quarterback Blake Bortles, but releasing him would leave $16.5MM in dead money on the cap, which may ultimately tie them to the former first-round pick for another season. If they do let him go, they’ll have less money to fill holes elsewhere and that may mean relying on a rookie QB. The Jaguars have the No. 7 overall pick, which will probably be too late to land Ohio State’s Dwayne Haskins, the consensus top QB in this year’s draft.

5 comments on “Jaguars To Hire John DeFilippo As OC”