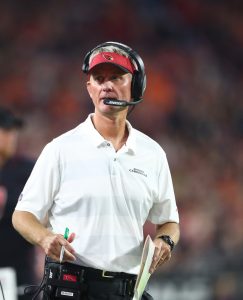 McCoy hooked on with Arizona in January of 2018, marking his third different offense in three years. McCoy ran the Chargers’ offense from 2013-16 as head coach and began the 2017 season as the Broncos’ OC before getting fired midway through the season. In October, after the Broncos walloped the Cards and held them to just 10 points in the process, McCoy was shown the door.

Clearly, McCoy’s reputation has taken a beating. Once considered one of the NFL’s brightest offensive minds, McCoy has not been on the coaching radar since his October dismissal. Still, the Jaguars are at least open to the idea of giving McCoy another shot at an OC position. If hired, McCoy will endeavor to restore his good name and actually make it through a complete season.

3 comments on “Jaguars To Interview Mike McCoy For OC Job”