The Falcons have exercised the fifth-year option on defensive end Vic Beasley, according to a team announcement. It was an easy call for Atlanta and GM Thomas Dimitroff told reporters back in February that he would be exercising the option. 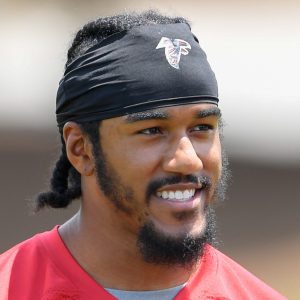 Beasley is already under contract through 2018 at a $4.6MM cap number, the fourth year of his rookie contract. The option year will pay him $14.2MM in 2019, as shown on PFR’s Fifth-Year Option Tracker.

The Falcons experimented with using Beasley as an outside linebacker in the past, but he’ll return to playing defensive end full time in 2018, according to head coach Dan Quinn. Despite his up-and-down ’17, his previous work and potential made the fifth-year option decision a simple decision.

In 2016, Beasley led the league with 15.5 sacks, earning a Pro Bowl nod and a First Team All-Pro selection. Last year, he had just five sacks as his mvoe to linebacker resulted in a career-worst 55.6 overall score from Pro Football Focus.

The fifth-year option is guaranteed for injury only, so the Falcons will have an opportunity to bail if necessary.