Despite the Giants winning two straight games and generating recent rushing production without Saquon Barkley, they will have a new offensive line coach when they return from their Week 11 bye. 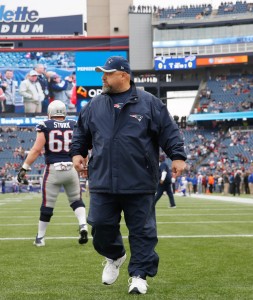 The Giants fired first-year O-line coach Marc Colombo after a shouting match with Joe Judge. The incumbent O-line instructor did not react well to the team bringing in veteran assistant Dave DeGuglielmo to work alongside him (Twitter links via The Athletic’s Dan Duggan and NFL.com’s Mike Garafolo).

Colombo earned the gig this offseason, beating out DeGuglielmo and rejoining OC Jason Garrett. Colombo had previously served as the Cowboys’ O-line coach. DeGuglielmo, however, had worked with Judge in New England and was on Tom Coughlin‘s staff as assistant Giants offensive line coach from 2004-08. He will go through COVID-19 protocols before joining the Giants, who will retain assistant offensive line coach Ben Wilkerson, Duggan notes (subscription required).

This marks the second straight year DeGuglielmo will take over for an O-line coach fired months after accepting a position. The Dolphins added DeGuglelmo after firing ex-Giants line instructor Pat Flaherty in August 2019. DeGuglielmo worked with Judge with the Patriots from 2014-15, during Dante Scarnecchia‘s sabbatical.

Andrew Thomas ranks 65th among tackles, according to Pro Football Focus, and Football Outsiders slots the Giants last in adjusted line yards. A former Cowboys offensive lineman, Colombo joined Garrett’s staff in 2016 and rose to the position of offensive line coach two years later. The Cowboys promoted to Colombo during the 2018 season, upon firing Paul Alexander. Judge has recently allocated more of his time to working with the O-linemen, with Garafolo noting the first-year HC viewed that as a position group that needed his attention (video link).

The Dolphins have fired offensive coordinator Chad O’Shea, per Mike Garafolo of the NFL Network (Twitter link). The longtime assistant spent 10 years with the Patriots as the club’s WRs coach and joined former New England DC Brian Flores in South Beach when Flores became the ‘Fins head coach this year.

However, Miami’s offense was ranked 27th in the league in 2019, and while an overall lack of talent is mostly to blame for that, Flores has elected to move in a different direction.

The Dolphins finished the 2019 season with the worst rushing offense in the NFL and just 25th in overall points scored. The front office is expected to overhaul the personnel in the coming months and, when those new players are in the mix, they’ll be led by a new OC.

The Dolphins’ new-look offense will likely include a first-round quarterback and then some. This offseason, the Dolphins will be armed with tons of cap space, plus the No. 5 overall pick, as they look to turn things around.

It was a challenging year for the Dolphins, but there were bright spots. Quarterback Ryan Fitzpatrick kept the club’s spirits up during a five-win season and they closed out the year with three wins in the last five games, including Ws over the Eagles and Patriots. 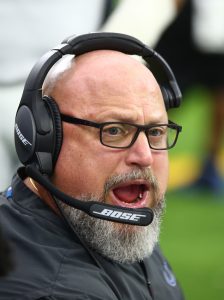