Former Broncos defensive coordinator Joe Woods will interview for the Redskins’ defensive backs coach job, and then decide between joining Washington or the Cardinals in the same role, according to Mike Klis of 9News (Twitter link). 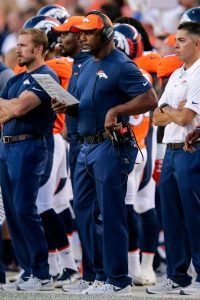 Woods, who succeeded Wade Phillips as Denver’s defensive coordinator in 2017, doesn’t appear to be generating any DC interest around the NFL despite leading a defense that’s ranked top-10 in DVOA in each of the past two seasons (including fifth in 2018). Arizona would seem to be a natural destination for Woods, as he’d once again be working under ex-Broncos head coach Vance Joseph, who was recently hired as the Cardinals’ defensive coordinator.

Meanwhile in Denver, co-defensive backs coach Marcus Robertson is not expected to return as a member of new head coach Vic Fangio‘s staff, and he’s also drawing interest from the Cardinals, tweets Klis. The Broncos’ other secondary coach — Greg Williams — won’t be back either, and he’s been linked to the Panthers and the Lions, per Klis.