Last week, the 49ers signed Spencer Long to a one-year deal. This week, they placed the offensive lineman on the reserve/retired list, per a club announcement.

Long, 29, spent last season as a key reserve for the Bills. He was a surprise cut in early August, leading him to the Niners. His stint in SF lasted just three days, and he’s apparently walking away from the sport altogether.

Long came into the league with Washington as a third-round pick in 2014. After four seasons in D.C., he moved on to the Jets in 2018 before landing with the Bills last year. If this is the end fo the line for Long, he’ll leave the sport with 67 games played, including 44 starts at both center and left guard.

The 49ers are signing Spencer Long, according to an announcement from his agent (Twitter link). The offensive lineman was released by the Bills earlier this week, making him an unrestricted free agent.

The Bills’ decision to release Long came as a bit of a surprise. Buffalo exercised the 2020 option on his deal in March and he appeared to be a strong fill-in option for Jon Feliciano at right guard. Instead, they dropped him to save $2.4MM against the salary cap.

The versatile vet saw time in 14 games for the Bills last year. Before that, Long made a total of 44 starts for Washington and the Jets between 2014 and 2018. In San Francisco, he’ll provide the 49ers with some sorely needed depth after offensive lineman Jake Brendel and tackle Shon Coleman opted out. Long, who can play multiple positions, will support the Niners’ front five of Trent Williams, Laken Tomlinson, Weston Richburg, Tom Compton, and Mike McGlinchey.

The Niners had ample room to sign Long. After the opt outs, GM John Lynch was left with $12.5MM in cap space.

The Bills are cutting offensive lineman Spencer Long, Adam Schefter of ESPN.com tweets. With the release, the Bills will drop the final two years on his original three-year deal.

The move comes as a bit of a surprise. The Bills exercised their 2020 option on Long’s deal back in March and he could have been a fill-in for Jon Feliciano at right guard. Instead, they’ll save $2.4MM by dropping him and carry $700K in dead money.

Long saw time in 14 games for the Bills last year. Before that, Long made a total of 44 starts for the [Washington Football Team] and the Jets between 2014 and 2018. With the ability to play multiple spots on the interior line, it stands to reason that he’ll find work before the start of the season.

In the meantime, the Bills will deploy new pickup Brian Winters in Long’s place. Winters, another ex-Jet, served as the Jets’ starting right guard from 2013-2019.

Spencer Long will stay in the AFC East. Not long after the Jets released the veteran center, the Bills signed him. The team announced the move.

It will be a three-year, $13MM agreement, Adam Caplan of Sirius XM Radio tweets, adding that Long could earn up to $15MM on this deal.

The Bills’ offensive line struggled last season, so changes can be expected. Longtime center Eric Wood‘s injury-induced retirement set the recently formidable unit back. Ryan Groy graded as one of the worst centers in the league, per Pro Football Focus, so it isn’t surprising to see Buffalo look to upgrade this position.

A three-year Redskins starter, Long was a first-stringer in 13 Jets games last season. A few of those games came at guard, and while the Jets liked his performance at guard, they still released him at almost the earliest possible offseason juncture.

With nearly $80MM in cap space, the Bills are almost certainly not done addressing their offensive front.

The Jets plan to limit Spencer Long’s stay to one season. They do not plan to pick up the center’s option bonus and will release him, Manish Mehta of the New York Daily News reports (on Twitter). The Jets confirmed the move.

However, the Jets would be interested in re-signing Long at a reduced rate, Mehta tweets. This would seemingly be contingent on Long generating scant interest elsewhere.

After four seasons with the Redskins, Long signed a four-year, $27.5MM contract. Just $6MM of his Jets deal was guaranteed. Long would have pocketed another $3MM if he was on the Jets’ roster on the third day after the Super Bowl.

For the Jets, this move will free up $6.5MM in additional cap space. While Gang Green is not exactly hurting for money, this would push their total beyond $95MM. Only the Colts hold more available funds. A three-year Redskins starter, Long started 13 Jets games but graded as Pro Football Focus’ second-worst full-time center this season. Though, the team liked how he played at left guard in December, Mehta notes.

New York does not have much in the way of long-term solutions up front, and the Jets plan to be aggressive in bolstering their line in free agency.

The Jets have their center. Gang Green will sign former Redskins center Spencer Long when the league year officially begins, according to Jason La Canfora of CBSSports.com (on Twitter). It’s a four-year, $28MM deal, a source tells Rich Cimini of ESPN.com (on Twitter). He can earn another $2MM with play time incentives.

Heading into free agency, the expectation was that the Jets would go hard after Ravens free agent Ryan Jensen. Instead, it’ll be Long manning the middle of the offensive line.

The Jets had a long history of quality play at center thanks to Kevin Mawae and Nick Mangold holding down the position for a combined 19 seasons. Things did not go as smoothly for the Jets at center in 2017, leading them to Long. Long takes over for Wesley Johnson and the Jets believe he’ll do a better job.

Long graded out as just the 19th best center in the NFL last season, according to the advanced metrics at Pro Football Focus. 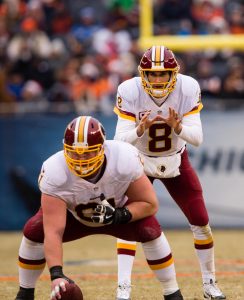 This may not be the free agent splash Jets fans were hoping for on Tuesday morning. Gang Green is pushing to land former Redskins offensive lineman Spencer Long, according to Jason La Canfora of CBS Sports (on Twitter).

Already, the Jets have seen one prospective free agent quarterback come off the board in Case Keenum as he is expected to sign with the Broncos on Wednesday. Meanwhile, Kirk Cousins is taking his first free agent visit with the Vikings.

Long can help bolster the Jets’ offensive line, but right now, no one knows which quarterback he’d be protecting. Last week, we rated Long as the 16th best interior lineman available.