The Jets have signed linebacker Spencer Paysinger, according to a team announcement. Paysinger will help fill in for the recently released David Harris. 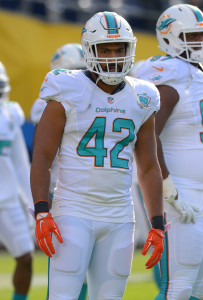 Paysinger, 29 later this month, has spent his entire career to date with Jets rivals. He entered the league as an undrafted free agent with the Giants in 2011. In 2015, he joined up with the Dolphins and has spent the last two seasons in Miami. Last year, Paysinger made 15 appearances (three starts) for Miami, tallying 52 tackles, three passes defensed, and two fumble recoveries.

The advanced metrics at Pro Football Focus rated Paysinger as the 51st best linebacker in the league last year out of 87 qualified players. His 68.4 overall score wasn’t earth-shattering, but it was better than that of the recently re-acquired Demario Davis (58.4) and 2016 first-round pick Darron Lee (38.3).

Free agent linebacker Spencer Paysinger will be returning to Miami for the 2016 season. Paysinger himself broke word of his new deal with the Dolphins, announcing the news on his Twitter account.

Paysinger, 27, joined the Dolphins for the 2015 season after spending the first four years of his NFL career with the Giants. Although he earned 10 starts in 2013, logging a career-high 74 tackles, Paysinger has served primarily as a backup linebacker and a special-teamer since entering the league. In 2015, he appeared in 14 games for Miami, playing just 72 defensive snaps.

Paysinger paid a visit to the Steelers earlier in free agency, after Pittsburgh saw backup linebacker Sean Spence sign with Tennessee. The Steelers ultimately re-sign Steven Johnson as Spence’s probable replacement, opening the door for Paysinger to return to Miami.

Terms of the agreement aren’t yet known, but Paysinger was on a minimum salary benefit contract in 2015 and probably won’t be in line for much of a raise.

After hosting him for a visit today, the Dolphins have signed linebacker Spencer Paysinger, according to Barry Jackson of the Miami Herald (via Twitter). Adam Caplan of ESPN.com tweets that it’s a one-year contract.

Paysinger, who has spent his first four NFL seasons with the Giants, was a regular contributor on defense in 2013, starting 10 games at linebacker and recording 74 tackles and a sack for the year. However, he returned to a backup and special teams role last season, during his final season in New York.

That reserve and special teams role will likely be the one Paysinger assumes in Miami. The team saw Jason Trusnik sign with the Panthers this week, and Jonathan Freeny signed with the Patriots last month. Both players were regular contributors on kick and punt coverage for the Dolphins, and occasionally saw playing time on defense as well — the duo combined for just over 400 defensive snaps in 2014.

The Ravens have accumulated more compensatory draft picks than any other NFL team over the past two decades, and Peter King of TheMMQB.com notes (via Twitter) that the Matt Schaub signing this week is a good example of how the team does it. Schaub, who was cut by the Raiders, won’t count toward the compensatory draft pick formula, but former backup Tyrod Taylor, whose contract expired, will count toward that formula. In other words, by swapping out one backup QB for another, the club could net a seventh-round comp next year.

Here are a few more notes on free agency, including some updates on players who remain unsigned: