The Panthers have added another name to the mix regarding their fluid quarterback situation. The team announced on Monday that Sam Darnold has been activated from IR. This will be their second activation of the year. 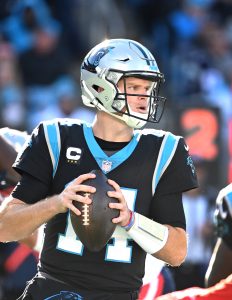 Carolina had until this Wednesday to make the move. If not, Darnold would have been ineligible to return this season. Interim head coach Steve Wilks‘ comments on the matter left the situation somewhat murky, but it comes as little surprise that Darnold will be available moving forward after his return to practice.

The 25-year-old suffered a high ankle sprain in the preseason, leading to the expectation of a prolonged absence to begin the campaign. That opened the door to offseason trade acquisition Baker Mayfield having an even firmer grip on the starting QB job in the opening weeks of the season, but he struggled mightily before suffering the same injury himself. P.J. Walker took over the No. 1 role for the next three games.

His level of play left Mayfield on the bench despite retuning to health, until halftime of yesterday’s blowout loss to the Bengals. Walker had guided one of the worst offensive performances through two quarters in franchise history, leading Wilks to replace him with Mayfield for the remainder of the game. That move left the starting spot wide open in advance of Carolina’s upcoming Thursday night game against the Falcons. Darnold – who, like Mayfield, is a pending free agent – will now factor into the team’s plans in the coming days.

In other Panthers news, more changes have been made along the team’s coaching staff. Cornerbacks coach Evan Cooper and defensive line coach Paul Pasqualoni were fired today, as detailed by ESPN’s David Newton. Cooper had been one of several assistants with ties to Matt Rhule, and his job description included a scouting role. He will be jointly replaced by defensive staffer Bobby Maffei and interim defensive coordinator Al Holcomb. Pasqualoni, 73, has five years of DC experience in the NFL; this was his first season in Carolina. Don Johnson and assistant d-line coach Terrance Knighton will occupy his vacated role.

These moves come less than one month after Rhule and DC Phil Snow were fired, of course, as the turnover in the organization continues. With a new configuration on the sidelines, and, potentially, another new face under center, the 2-7 Panthers will host the Falcons to begin Week 10 as they hope to rebound from yesterday’s loss. 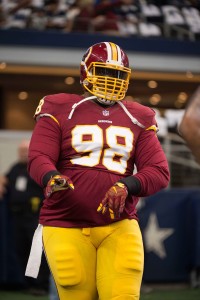 A third-round pick out of Temple in 2009, Knighton spent the first four years of his playing career with the Jaguars before signing with the Broncos in 2013. Knighton was at his best in Denver, where he started in all 32 of his regular-season appearances overall and, in 2014, was part of the NFL’s second-best run defense. The man known as “Pot Roast” finished as Pro Football Focus’ 12th-ranked D-tackle that year, and he left the Broncos the next offseason to sign with the Redskins.

Knighton started in all 15 of his appearances in Washington in 2015, which will go down as his final season. Although he inked a one-year, $4.5MM deal with the Patriots last April, he was unable to make the eventual Super Bowl champions’ roster. They cut Knighton prior to Week 1, and he nearly went on to reunite with the Redskins. However, no deal materialized after he met with them in October.

Knighton’s career concludes with 108 appearances, 96 of which were starts, as well as 14 sacks. PFR wishes him well as he looks to enter the coaching ranks.

Could Pot Roast return to D.C.? Today, the Redskins are hosting Terrance Knighton on a visit, as Mike Jones of The Washington Post tweets. With Knighton and Phil Taylor in town, the Redskins are clearly looking to bolster the interior of their defensive line. 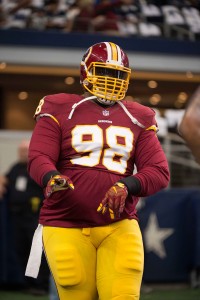 After finishing his contract in Denver, Knighton was expected to cash in following the 2014 season. Instead, he found a mild free agent market and settled for a low-priced one-year deal with the Redskins. As a nose tackle in Washington’s 3-4 scheme, Pot Roast logged 29 tackles and 1.5 sacks in 2015. Although he didn’t have quite the same impact last year that he did during his final season as a Bronco, Knighton ranked in the top half of Pro Football Focus’ list of qualified interior defenders, placing 58th out of 123 players. Predictably, PFF assigned Knighton a much better grade as a run defender than as a pass rusher.

This past offseason, he hooked on with the Patriots but was released in late August. Knighton’s release came as something of a surprise, especially given the Pats’ depth concerns on the defensive line. Now, the Redskins need some veteran help on the D-Line and he could circle back there.

The Patriots have had enough Pot Roast. Veteran defensive lineman Terrance Knighton was released by the Pats this morning, as first reported by Knighton himself on Twitter. By cutting Knighton, the Pats save $900K in salary and $3MM in bonuses. 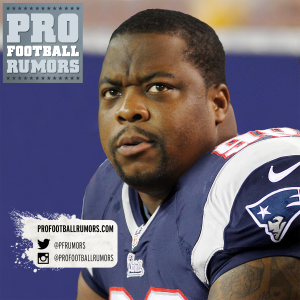 This offseason, the Pats inked Knighton to a one-year, $4.5MM deal. However, he struggled in the team’s second preseason game against Chicago and he did not log a single defensive snap during New England’s third preseason contest against Carolina on Friday night. Knighton found himself slipping on the Pats’ depth chart in recent weeks and his salary was no longer justifiable for the team, even though they have seen stars like Rob Ninkovich go down with injuries.

Knighton, who started his career in Jacksonville, spent two seasons in Denver before heading to Washington for the 2015 campaign. The 30-year-old has been very durable in his first seven NFL seasons, appearing in 108 total regular-season games, including 96 starts.

A nose tackle in Washington’s 3-4 scheme, Pot Roast logged 29 tackles and 1.5 sacks in 2015. Although he didn’t have quite the same impact last year that he did during his final season as a Bronco, Knighton ranked in the top half of Pro Football Focus’ list of qualified interior defenders, placing 58th out of 123 players. Predictably, PFF assigned Knighton a much better grade as a run defender than as a pass rusher.

The Patriots now must release six more players by 3pm CT on Tuesday in order to reach the 75 man max.

The Patriots signed Terrance Knighton to a one-year, $4.5MM deal this offseason to serve as a key cog in the interior of the club’s defensive front, but now Pot Roast is in danger of being cut, as Kevin Duffy of MassLive.com writes. Knighton struggled in the team’s second preseason game against Chicago, and he did not log a single defensive snap during New England’s third preseason contest against Carolina on Friday night.

Knighton, who insisted that he is completely healthy, expressed his frustration afterwards. He said, “It’s disappointing just because, you know, I’ve played a lot of ball in this league, seen a lot of things. I’m not going to make too much of it. It is what it is. Whatever happens, happens. If I’m here, I’m here. If I’m not, I’m not. I’m just taking it a day at a time.”

If Knighton does indeed receive his walking papers, he should be able to find work with a club looking for a dependable and durable run-stuffer.

Now for some more notes from the AFC:

5:04pm: Pot Roast has reached his verdict. Terrance Knighton has been deciding between offers from Washington and the Patriots this week and he has decided to join New England, according to Dianna Marie Russini of ESPN.com (on Twitter).

Knighton, who started his career in Jacksonville, spent two seasons in Denver before heading to Washington for the 2015 campaign. The 29-year-old has been very durable in his first seven NFL seasons, appearing in 108 total regular-season games, including 96 starts.

A nose tackle, in Washington’s 3-4 scheme, Pot Roast logged 29 tackles and 1.5 sacks in 2015. Although he didn’t have quite the same impact last year that he did during his final season as a Bronco, Knighton ranked in the top half of Pro Football Focus’ list of qualified interior defenders, placing 58th out of 123 players. Predictably, PFF assigned Knighton a much better grade as a run defender than as a pass rusher.

Last offseason, Pot Roast was expected to net a sizable deal but wound up having to settle for a one-year, $4MM pact from Washington. The six-year veteran was an integral part of a Broncos team that had the league’s second-best run defense in 2014, and Pro Football Focus (subscription required) rated Knighton 12th among 81 qualifying D-tackles. He’ll now try to get back to his 2014 form in New England.

The Patriots don’t run a 3-4 base, so he won’t be playing quite the same role that he did in D.C. Still, New England is in need of big bodies up front, having lost Akiem Hicks and Sealver Siliga in free agency earlier this month.