Free agent outside linebacker Ahmad Brooks has been suspended by the league for six games, according to Field Yates of ESPN (Twitter link). 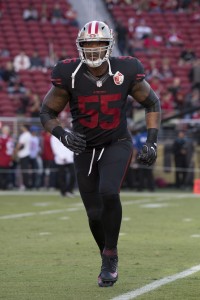 It’s unclear at this time what the suspension is for, although six games is now the league’s standard punishment for domestic violence. Whatever the cause, it’s likely the suspension is why the 34-year-old hasn’t been able to latch on anywhere.

After his lengthy stay with the 49ers, he signed a one-year $3.5MM deal with Green Bay, but the signing never worked out and the once excellent pass-rusher finished the season with just one sack. With his advanced age and now this suspension, Brooks’ career very well could be over. If he is forced to hang them up, he’ll finish his playing days with 389 tackles, 55 sacks, and 32 passes defended.

When asked if edge rusher Pernell McPhee will ever be the player he was when the Bears originally signed him in 2015, Chicago defensive Vic Fangio gave a simple answer: “Probably not” (Twitter link via Eric Edholm of Pro Football Weekly). McPhee, who was surprisingly removed from the physically unable to perform list and placed on Chicago’s initial 53-man roster, has injured both knees during his time with the Bears. While he’s missed nine games over the past two seasons, McPhee has still been relatively effective when on the field, but may need his snaps limited going forward.

The Packers have agreed to a one-year, $3.5MM deal with linebacker Ahmad Brooks, Ian Rapoport of NFL.com reports (on Twitter). The pact could be worth up to $5MM. Brooks visited with the Pack shortly after the 49ers released him Aug. 25.

Green Bay will be the third NFL destination for Brooks, who spent the first two years of his career in Cincinnati before joining San Francisco in 2009. He became one of the most accomplished pass rushers in 49ers history during his eight-year tenure in San Fran, where he racked up 51.5 sacks and never finished with fewer than five in an individual season. Brooks was also quite durable as a member of the 49ers, with whom he appeared in at least 13 games in each year.

Most recently, Brooks totaled six sacks during a 16-game, 15-start slate last season, indicating that the 33-year-old still has plenty to offer. While Pro Football Focus wasn’t enamored of Brooks’ work, ranking him just 87th in performance among 110 qualified edge rushers, he still figures to help a Green Bay defense that lost prolific rusher Julius Peppers to Carolina in free agency. Brooks’ presence on the outside could lead the Packers to move Clay Matthews inside, where he’d potentially be an upgrade over Jake Ryan and/or Blake Martinez in nickel packages, as PFR’s Dallas Robinson noted this week. Regardless, Brooks adds a third proven edge rusher behind the Matthews-Nick Perry duo, giving the Packers a trio that combined for 22 sacks in 2016.

With Nick Foles battling an elbow injury that has kept him out of preseason action and Matt McGloin having such a subpar summer that he’s likely to lose his roster spot, the Eagles may have a backup quarterback problem. They could potentially solve it by signing free agent Colin Kaepernick, Mike Sielski of Philly.com contends. Kaepernick remains unemployed in part because owners don’t want to deal with the backlash that would accompany signing the political activist, but that shouldn’t be a problem for the Eagles. After all, owner Jeffrey Lurie signed Mike Vick as a backup QB in 2009, after he served an 18-month prison sentence for his role in a dogfighting ring. While it’s up for debate whether Kaepernick is in the right, Vick’s actions were undeniably revolting. And yet he was able to land a second chance in Philadelphia.

More from Philly and two other NFC cities:

San Francisco is parting ways with its longest tenured defensive player. The 49ers formally announced that they have released outside linebacker Ahmad Brooks. The team initially tried to trade Brooks, but they were unable to find a suitable deal. 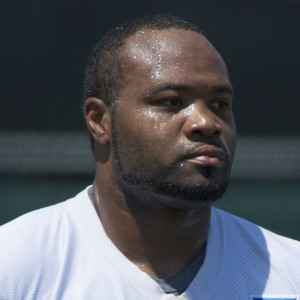 “We would like to thank Ahmad for his nine years of service and contributions to the 49ers,” said 49ers general manager John Lynch. “In that time, he played a significant role on some formidable defensive units that helped this team achieve great success. We feel good about the depth and competition along our defensive front and believe that by making this decision now it will give Ahmad a head start on exploring his options with other teams. We wish him and his family nothing but the best.”

The 33-year-old was in the midst of a battle with Eli Harold for the starting strongside linebacker job. Apparently, he lost his footing on the gig as Harold started against the Broncos in the team’s most recent preseason game. Harold is ten years Brooks’ junior and comes at a fraction of the price. Free agent addition Dekoda Watson and rookie Pita Taumoepenu are also expected to contribute at SLB.

Brooks has either led or tied the team in sacks every season since 2013. In 2016, Brooks registered 6.0 sacks and 53 total tackles. Across his eight years with the team, he amassed 51.5 sacks and never had less than 6.0 in any given season. He also played through injury and missed only five regular season games during that span.

Brooks is still putting up numbers, but he has slowed down a little with age. Last year, he graded out as just the 87th best edge rusher in the NFL out of 110 qualified players, per Pro Football Focus. In each of the last three years, Brooks has finished near the bottom of PFF’s edge defender rankings and has not graded out as a top-20 type since 2012. He’ll draw interest on the open market, but he won’t command the kind of salary he was getting in SF.

Brooks was slated to carry a $6.1MM+ cap hit for the coming season. Instead of keeping the veteran and having him take up roughly 3.5% of the salary cap, the SF will save $5.3MM while eating $848K in dead money.

News of Brooks’ release was first reported by Matt Barrows of The Sacramento Bee.

If Von Miller were to reach the open market, he would likely be looking to become the NFL’s highest-paid defensive player, according to Jason Cole of Bleacher Report (video link), who points to Ndamukong Suh‘s six-year, $114MM deal with the Dolphins as the one Miller would like to match or exceed. As Cole notes, there would be plenty of teams with interest in the outside linebacker if he becomes an unrestricted free agent.

However, the odds of Miller hitting the open market look pretty slim. Even though the Broncos have other key free agents that could be candidates for the franchise tag, including Brock Osweiler and Malik Jackson, Denver is expected to use that tag on its star pass rusher, says Cole. That doesn’t mean Miller won’t sign a long-term deal this offseason, but it would have to be either with the Broncos or with a team willing to give up two first-round picks to land him, so his leverage will be limited.