Lamarr Houston has officially decided to hang them up. Today, he signed a one-day contract with the Raiders and announced his retirement, per Charean Williams of ProFootballTalk.com.

Houston entered the league as a defensive end, and the Raiders made him a second-round in 2010. He spent four seasons with the organization, appearing in each of their 64 games (60 starts). He averaged 69 tackles, five sacks, and 1.5 forced fumbles between the 2012 and 2013 seasons.

He ended up inking a five-year, $35MM contract ($15MM guaranteed) with the Bears prior to the 2014 campaign, but his first season in Chicago was derailed by a torn ACL. He returned as a linebacker in 2015, appearing in 16 games and compiling a career-high eight sacks, but he once again landed on the IR in 2016.

Houston split the 2017 campaign between the Texans and Bears (second stint), and he worked out for the Raiders, Jets, Seahawks, and Vikings back in 2018. While he hasn’t played in the league since 2017, he didn’t officially retire until today. In total, the 32-year-old finished his career having collected 302 tackles, 30 sacks, and five forced fumbles in 100 games.

Dominique Rodgers-Cromartie isn’t the only defender the Seahawks will be hosting for a workout. NFL.com’s Ian Rapoport reports (via Twitter) that the organization will also be auditioning linebacker Lamarr Houston and defensive end Damontre Moore. Meanwhile, ESPN’s Adam Schefter tweets that the Seahawks will also work out linebacker Erik Walden. 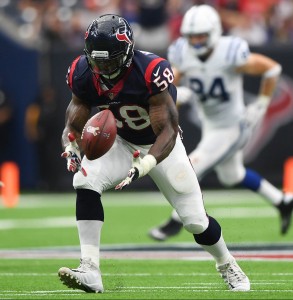 Houston, 31, will be looking to catch on with his fourth NFL team. He split last season between the Bears and Texans, compiling 17 tackles, five sacks, and one forced fumble in 10 games (one start). While the veteran has clearly lost a step, he could still provide the Seahawks with some leadership and depth. The former second-rounder previously met with the Jets and Raiders.

Walden has managed to put together 10-year NFL career despite being selected in the sixth round of the 2008 draft. After serving as a starter with the Colts for four seasons (including a 2016 campaign where he compiled 11 sacks), the 32-year-old spent last season as a backup with the Titans. He finished the year with 36 tackles and four sacks in 16 games (two starts).

If Houston or Walden catch on with Seattle, they’d presumably compete with Shaquem Griffin, D.J. Alexander, and Jake Martin for backup outside linebacker reps.

Moore, 25, has bounced around the NFL since breaking out with the Giants in 2014. After serving a two-game suspension, Moore played in three games for the Cowboys last season, compiling five tackles. His last notable contribution came in 2015 with New York, when he finished with 23 tackles, three sacks, and one forced fumble. Moore would compete with Rasheem Green, Marcus Smith, Branden Jackson, and Quinton Jefferson for backup snaps at defensive end. 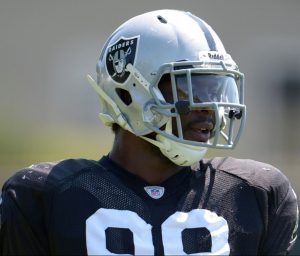 The Bears have claimed linebacker Lamarr Houston, according to Ian Rapoport of NFL.com (on Twitter). The Texans released the veteran on Tuesday, exposing him to post-trading deadline waivers. 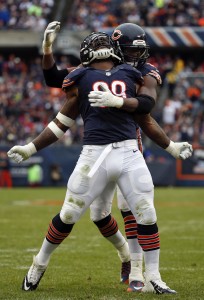 Houston spent the 2014-2016 seasons in Chicago. The results were mixed, primarily due to his health. Houston, 30, didn’t live up to his five-year, $35MM free agent deal signed in 2014. In three seasons with the Bears, Houston has appeared in just 26 of a possible 48 games and made only ten starts. The Bears opted to release Houston just prior to Week 1 of this season.

The potential remains for Houston to be an effective edge rusher, although perhaps not as a starter like when he was with the Raiders. After two ACL tears and multiple other knee injuries, he could best serve the Bears as a reserve. Currently, the Bears are starting Mitch Unrein and Akiem Hicks at defensive end with Pernell McPhee and Sam Acho as the starting outside linebackers. Houston figures to get reps at OLB, particularly wtih Leonard Floyd and Willie Young on IR.

In five games with the Texans, Houston recorded seven total tackles, one forced fumble (recovered for a touchdown), and one sack.

Lamarr Houston‘s time in Houston has come to an end. The linebacker has been waived, according to Ian Rapoport of NFL.com (Twitter link). The release isn’t necessarily a reflection on his performance – Rapoport hears the Texans are shifting focus to younger players.

Houston joined the Texans on a one-year deal in October. At the time, the Texans were still in the mix for the AFC South crown. Today, they’re 4-7 with no real chance at reaching the playoffs. By cutting Houston, the Texans will get a chance to evaluate edge rushers who could be a part of the solution in 2018. Meanwhile, Houston may get a chance to hook on with a contending club.

Although Houston is a vested veteran, he’ll be subject to waivers since we are beyond the trading deadline. If no one claims Houston within a 24 hour period, he’ll be free to sign with any team of his choosing.

Although the Texans lost two of their best defenders — J.J. Watt and Whitney Mercilus — to season-ending injuries on Sunday night, they’re still firmly in the AFC South race. They sit alongside the Colts and Titans at 2-3, and all those clubs are one game behind the division-leading Jaguars. With one fell swoop, the Texans have now added two veteran defensive players who between them offer 225 games of NFL experience.

Houston, who was in town today to work out for the Texans, has been busy since being released by Chicago last month. In addition to the Texans, he’d met with or auditioned for the Patriots, Saints, and Buccaneers.

The Texans will audition defensive end/linebacker Lamarr Houston on Tuesday, according to Ian Rapoport of NFL.com (Twitter link).

The Buccaneers reportedly worked out Houston today, but the Texans have a far greater need along their front seven. Both J.J. Watt and Whitney Mercilus suffered season-ending injuries on Sunday, leaving the club without two of their top three pass rushers. While incumbent options such as Brennan Scarlett could see increased snaps, Houston would give the Texans another jolt in Mike Vrabel’s 3-4 scheme.

The Buccaneers are working out free agent defensive end Lamarr Houston, according to Ian Rapoport of NFL.com (Twitter link). Tampa Bay has also added two kickers to its audition list in the forms of Patrick Murray and Marshall Koehn, reports Greg Auman of the Tampa Bay Times.

Chicago placed Houston on injured reserve (and subsequently released him) earlier this year, but the veteran pass rusher reportedly doesn’t have any structural knee dame. The Buccaneers likely want to confirm that, and see if the seven-year pro could help improve a defensive line which will be without reserve Ryan Russell for the next several weeks. Since parting ways with the Bears, Houston has worked out for the Saints and Patriots.

Murray and Koehn, meanwhile, will join a tryout group of kickers that also includes Mike Nugent, Josh Lambo, and Andrew Franks (Cairo Santos will also be in town for a physical). Incumbent Nick Folk missed three field goals last Thursday night, and has failed to convert five total attempts on the season.