Yesterday, ESPN’s Jordan Raanan reported (via Twitter) that veteran cornerback Dominique Rodgers-Cromartie would be working out for the Seahawks this weekend, which came on the heels of rumors that DRC was generating interest from Seattle and the Chargers. ESPN’s Josina Anderson, however, tweeted this morning that while DRC was indeed scheduled to be in Seattle today, he had a family matter to attend to and could not make the trip. There is no word yet on whether the visit will be rescheduled. 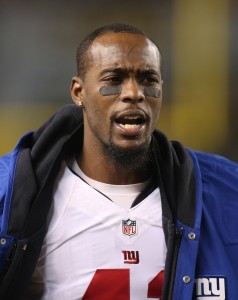 It’s been a relatively quiet offseason for the 32-year-old since he was let go by the Giants in March. It sounded like Rodgers-Cromartie could have joined the Redskins, but the team ultimately found that the asking price was too high. The 10-year-veteran had also received some interest from the Saints, but there have been no other reported workouts. Despite that, DRC still earned a spot on our recent listing of the top available free agents.

It was an underwhelming 2017 campaign for Rodgers-Cromartie. His 77.2 overall score from Pro Football Focus was his lowest since 2012, and he ultimately finished as the league’s 58th-ranked cornerback. As he settled into more of a reserve role, his numbers also took a predictable dip. He finished the season with 48 tackles, 0.5 sacks, and one pass defended in 15 games (five starts). He also clashed with former Giants coach Ben McAdoo before being suspended “indefinitely” for conduct detrimental to the team.

Of course, the Seahawks have had their fair share of head cases over the years, so Pete Carroll‘s staff would be plenty prepared for DRC’s antics. The team could use a slot cornerback, especially after waiving DeAndre Elliott. Behind projected starters Justin Coleman and Shaquill Griffin, the Seahawks are also rostering Dontae Johnson, Byron Maxwell, Tre Flowers, Neiko Thorpe, and Trovon Reed.