Josh Gordon “Getting Closer” To Return

Mary Kay Cabot of Cleveland.com reports that Josh Gordon is getting closer to returning to the Browns, though there is still no definitive timetable. She says he will not be back with the team by August 7, but the Browns are not going to let that hurt his free agent status, as the team wants him to focus on his long-term health and well-being (Twitter links). As Mike Florio of Pro Football Talk observes, if Gordon does not report to the team by August 7, the Browns could keep him from becoming a restricted free agent until after the 2019 season (at the earliest) and from being eligible for unrestricted free agency until after the 2020 campaign, but it does not sound as if Cleveland will exercise that right. So, if he does eventually suit up as expected, Gordon could become a restricted free agent next March. 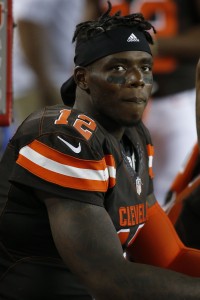 Gordon’s teammate and fellow Browns receiver Rashard Higgins says that Gordon is in good spirits, and Higgins does not believe that Gordon’s absence will impact his play when he ultimately returns to the team. Higgins said, per Tony Grossi of ESPN 850 WKNR, “We were texting [Friday]. He’s in good spirits. We don’t talk about anything about the field or anything. We just talk about, ‘Hey, what’s up bro? How you doing?’ We’re not too concerned. We know Josh is handling his business off the field. When he comes back, he’ll be ready to go.”

Although that may sound like the optimistic take of a friend and teammate, Cabot’s report suggests that there may be something to what Higgins is saying. Plus, as Grossi writes, Browns GM John Dorsey has not added a veteran receiver like Dez Bryant or Brandon LaFell — even though he said he would when Gordon did not report for the first day of training camp — and social media images of Gordon working out in Gainesville, Florida have been more prevalent in the past few days.

Of course, there is still a chance that commissioner Roger Goodell could impose yet another ban on Gordon when he does come back, but Cabot’s report is a positive development just the same. On paper, the Browns have one of their most talented rosters in recent memory, and their top receiving trio of Gordon, Corey Coleman, and Jarvis Landry is a big part of that. In light of Coleman’s injury difficulties, which have already cropped up again, Gordon’s availability is especially critical.

12 comments on “Josh Gordon “Getting Closer” To Return”