5:04pm: The signing is now official, and the Chargers have waived/injured wide receiver Jamaal Jones to create a roster spot, tweets Eric Williams of ESPN.com

2:58pm: The Chargers have agreed to sign James Jones, according to Ian Rapoport of NFL.com (on Twitter). Jones met with the Chargers on Tuesday morning and San Diego apparently liked what they saw from him. 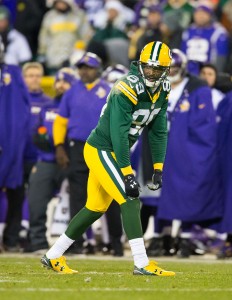 Jones led the Packers in 2015 with 890 receiving yards off of 50 receptions. He also led Green Bay’s wide receivers with eight touchdowns. That was a different stat line than 2014, a year in which he corralled a career-high 73 receptions for just 666 yards and six touchdowns for the Raiders.

As Stevie Johnson deals with a knee injury, the Chargers are looking for an experienced fill-in to help round out their group of receivers and Jones could be that guy. As shown on Roster Resource, Johnson is slated to work behind Keenan Allen and offseason pickup Travis Benjamin in the club’s wideout pecking order, but an ACL issue has put his season in jeopardy. The Bolts – who also have Tyrell Williams, Dontrelle Inman, Javontee Herndon, Torrence Allen, and Isaiah Burse on the depth chart – are waiting on a second opinion to see if Johnson will be able to suit up this year. In his first year with the Bolts, Johnson battled injuries and posted respectable production in 10 games, racking up 45 catches on 65 targets for 497 yards and three touchdowns.

The Chargers also worked out Brian Hartline and Lance Moore on Tuesday, but it sounds like they might not have a need for either player now that Jones is in the fold.