The Vikings are set to audition a group of kickers on Tuesday, according to Tom Pelissero of USA Today (on Twitter). The workout will include Kai Forbath, tweets Matt Vensel of the Minneapolis Star-Tribune. Randy Bullock is also likely to be a part of that group, but it’s not clear who else will be participating. In total, there should be four or five kickers in attendance, according to Darren Wolfson of 1500 ESPN (on Twitter). 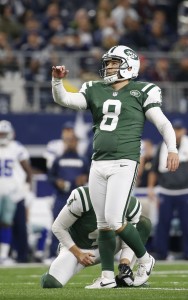 On Sunday, Blair Walsh missed an extra point attempt and had a field goal blocked as the Vikings lost to the Lions 22-16. This year, Walsh is just 12-16 on field goal attempts, though it should be noted that three of those misses came from more than 40 yards away.

Bullock was part of a group of kickers that worked out for the Bengals recently, along with Zach Hocker and Forbath. As of right now, the Bengals have not made a change at kicker and are forging ahead with Mike Nugent. Bullock served as the Giants’ kicker in the season opener while Josh Brown served his (initial) one-game suspension.

5 comments on “Vikings To Audition Kickers”