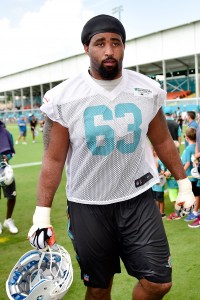 Jamarca Sanford may have signed an extension with the Saints this past offseason, but the veteran’s tenure in New Orleans might be over. Evan Woodbery of NOLA.com reports (via Twitter) that the team has placed the veteran safety on the injured reserve. To take his roster spot, the Saints have signed nose tackle Lawrence Virgil.

The 30-year-old played in all 16 games for the Saints last season, compiling 14 tackles and one interception in 105 total defensive snaps. The former seventh-round pick has settled into a back-up/special teams role over the past several years, but the Saints thought enough of him to offer a one-year contract this past offseason. Before joining the Saints in 2014, Sanford played for the Redskins and Vikings, where he started 44 games in five seasons.

The Saints signed veteran defensive back Roman Harper earlier this month, but Woodbery isn’t sure if that addition was related to the Sanford move. Either way, the writer notes that Sanford’s roster spot was certainly in question following the acquisition of Harper.

As Woodbery tweets, Lawrence Virgil was originally signed by the Saints as an undrafted free agent in 2014. After compiling a pair of tackles as a rookie, the Valdosta State product spent 2015 on the injured reserve.

Running back C.J. Spiller says he’s ready to live up to the billing he received when he inked a four-year, $16MM deal with the Saints last March, Joel A. Erickson of The Advocate writes.

“When I’m 100 percent and able to do what I’m able to do, I know I can flourish in this offense,” Spiller said. “This offense is built for my type of skill set. I wouldn’t want to be in any other one — a great head coach that knows how to put players in position to make plays, and then you’ve got a quarterback that’s a future Hall of Famer, that knows how to win matchups and to take advantage of each and every play. I’m just happy that I have a chance to revamp or redeem myself and give this team hopefully 100 percent.”

Last season, Spiller amassed only 112 yards on a meager 36 carries and caught 34 passes at just 7.0 yards per reception before being placed on IR in December.

Here are Tuesday’s minor signings, cuts, and other transactions from around the NFL:

The Saints have made a defensive roster change in advance of Week 13’s contests against the Steelers, officially placing injured defensive tackle Brodrick Bunkley on their injured reserve list, according to a team release. To fill Bunkley’s spot on the 53-man roster, defensive tackle Lawrence Virgil has been promoted from the practice squad, as we heard yesterday.

Bunkley, who turned 31 on Sunday, suffered a leg injury during New Orleans’ Monday loss to the Ravens. Although the team didn’t specify the diagnosis, a report earlier in the week indicated that Bunkley had torn his quad and was expected to be out for the rest of the season.

With 276 defensive snaps this year, Bunkley was New Orleans’ second-most-used defensive tackle, according to Pro Football Focus (subscription required). I’d expect increased roles for players like John Jenkins and Tyrunn Walker over the last few weeks of the season, with Virgil serving as a depth piece on the defensive line.

We rounded up the first wave of practice squad additions in a series of posts by division yesterday, which you can check out on our Transactions page. Several more teams have announced new practice squad players today, or made slight changes to their units, so we’ll round up that news right here: