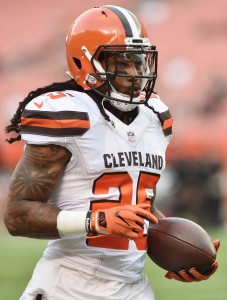 Pryor is now eligible to practice immediately, although he isn’t able to return to game action until Week 10. The NFL’s IR/designated to return rules stipulate an eight-week absence, so Pryor will have to wait one more week to come back, even if he’s fully healthy after suffering an ankle injury earlier this year. Jacksonville has a three-week window in which it can place Pryor on its active roster, or else he must stay on injured reserve for the remainder of the season.

If he is activated, Pryor will come to the Jaguars’ roster as a clear backup. The Jaguars rank first in DVOA against the pass, and the club’s safeties — Barry Church and Tashaun Gipson — are a large part of that effort, as both rank among the NFL’s top 25 defensive backs, per Pro Football Focus. As such, Pryor will become a reserve safety (or, given his playing style, perhaps a dime linebacker) and special teams contributor.

The Jaguars claimed Pryor off waivers from the Browns in September after the former first-round pick secured his ouster in Cleveland by getting into a fight with wide receiver Ricardo Louis. In Jacksonville, he reunites with executive John Idzik, who originally drafted Pryor as the Jets’ general manager in 2014.