On Monday, running back Chris Johnson formally announced his retirement from the NFL. The 33-year-old was said to be seeking a contract in the offseason, but did not appear to receive any interest. 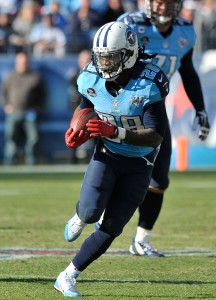 “I would like to take this time to thank my family, friends, fans, and teammates who have given their continued support throughout my 10-year career,” Johnson said in a statement released by his agency. “My time in the NFL has given me so many opportunities and memories. After a great deal of thought and consideration, I have decided to close this chapter of my life and I look forward to the new possibilities that have been afforded to me.”

Johnson averaged 1,328 yards per season over his six years with the Titans, including a 2,000+ yard campaign in 2009. He leaves the game with a stellar list of accomplishments, including three Pro Bowl selections and one First-Team All-Pro nod.

After an awkward exit from Tennessee, Johnson hooked on with the Jets. He was quietly productive with an average of 4.3 yards per carry and turned in a similarly strong year with the Cardinals in 2015. After that, he was slowed by injuries and eclipsed by the emergence of David Johnson. Johnson’s last NFL game came on Oct. 8, 2017 as he was ushered out of Arizona days later to make room for Adrian Peterson.

Johnson likely won’t be a Hall of Fame candidate, but he’ll be long remembered for his blazing speed, aggressive running style, and countless memorable moments with the Titans. We here at Pro Football Rumors wish CJ2K the best in retirement.

Running back Chris Johnson isn’t ready to call it a career, but it doesn’t sound like he’s doing himself any favors. WFTS in Tampa Bay (via Mike Florio of ProFootballTalk.com) reports that the free agent is facing a misdemeanor battery charge in Florida.

The charge stems from allegations that Johnson assaulted a valet driver in Tampa, causing the victim to suffer a cut lip and bloody nose. Surveillance cameras reportedly captured the confrontation, and after the club’s owner identified Johnson, the victim separately picked him out of a lineup. Through his lawyer, the veteran entered a plea of not guilty earlier this week.

We heard back in March that the 32-year-old wasn’t ready to retire, with Johnson stating that he wanted to “give it another go.” Johnson didn’t have many suitors last offseason, and he ended up catching on with the Cardinals on a one-year deal. Arizona cut the veteran one month into the season, and the running back didn’t attract any reported interest after that.

In those four games (three starts), Johnson compiled 114 rushing yards on 45 carries. He added another five receptions for 43 yards. The former first-rounder last looked solid during the 2015 campaign, compiling 814 rushing yards and three scores. When Johnson suffered a suffered a fractured tibia in Week 12 of that season, the door opened for David Johnson, who has since emerged as one of the league’s top young rushers.

Chris Johnson Not Ready To Retire

Chris Johnson‘s 2017 season ended prematurely when he he was released by the Cardinals in October, but he is not ready to give up on football. The running back says he wants to “give it another go,” according to ESPN.com’s Josina Anderson (on Twitter).

“I’m not done yet,” Johnson said. “I am still going strong. I got too much juice left.”

It remains to be seen whether the rest of the league agrees with CJ2K’s assessment. Johnson did not draw significant interest last offseason before re-signing with Arizona on a one-year deal just prior to the season opener. When he was cut loose one month later, there were no reports of Johnson getting calls from other teams.

Many assumed that Johnson was on the downslope of his career when he was let go by the Titans after the 2013 season. He answered critics in 2014 by averaging 4.3 yards per carry for the Jets and followed that up with 4.2 yards per tote for Arizona in 2015. When Johnson suffered a suffered a fractured tibia in Week 12, that opened the door for David Johnson, who has since emerged as one of the league’s premier young rushers. Over the last two years, C. Johnson has appeared in just eight games thanks to a groin injury in ’16 and his release last season.

Johnson averaged 1,328 yards per season over his six years with the Titans, including a 2,000+ yard campaign in 2009. His resume, which includes three Pro Bowl selections and one First-Team All-Pro nod, is impressive, but he’ll be celebrating his 33rd birthday in September.

Chris Johnson‘s time in Arizona has come to a close. The Cardinals released CJ2K in order to make room for the newly-acquired Adrian Peterson.

The 31-year-old rushed for 814 yards and three touchdowns before giving way to David Johnson as the club’s starting running back in 2015. He missed the bulk of 2016, but the team circled back to him again this year when D. Johnson suffered a wrist injury. This time around, things didn’t work out quite as well. The older Johnson had 114 yards off of 45 carries, averaging out to 2.5 yards per attempt.

Johnson has six 1,000-yard seasons (including a 2,000-yard campaign) and three Pro Bowl nods on his resume, but those days are likely behind him. If he can’t find a team willing to give him consistent playing time, it’s possible that he could just hang ’em up.

The 31-year-old rushed for 814 yards and three touchdowns before giving way to David Johnson as the club’s starting running back in 2015. Unfortunately, he missed the bulk of last year due to injury.

CJ2K missed the team’s initial 53-man cut this year. Luckily for the Cardinals, he was still available when they needed him. The former Titans star now profiles as an insurance addition. This marks his latest go-round with the team, and the backfield looks similar to how it did during Johnson’s productive 2015 slate.

Chris Johnson, Andre Ellington and Kerwynn Williams each remain on the team and will likely be expected to form an emergency committee in place of David Johnson. Each has been with the Cards for at least three seasons, with Ellington now in his fifth Arizona campaign. Ellington served as the Cardinals’ primary starter in 2014 before CJ2K relegated him to backup work a year later.

But the Cards now possess plenty of experience for a team that experienced the setback they did. While none of their replacement options is on David Johnson’s level, the Cardinals may be able to use this depth to reasonably withstand this seminal development collectively. 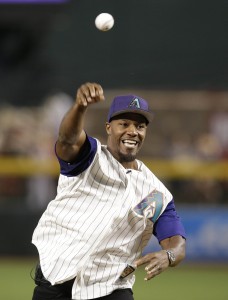 The Cardinals will release running back Chris Johnson, according to Adam Schefter of ESPN.com (Twitter link).

Johnson missed the majority of the 2016 campaign with injury, but had been a solid contributor for Arizona as recently as 2015, when he rushed for 814 yards and three touchdowns before giving way to David Johnson as the club’s starting running back. Having signed a one-year deal that contained $200K guaranteed earlier this year, Johnson had been viewed as a lock for the Cardinals’ roster. Now, the 31-year-old back with have to look for work elsewhere (if he plans to continue his career, that is).

The Cardinals, clearly, are set at running back with the aforementioned Johnson, who figures to handle the majority of the club’s carries. Even superstars need breathers, however, and Arizona will turn to Kerwynn Williams and Andre Ellington as Johnson’s backups. Rookie T.J. Logan, meanwhile, could return later this year after recovering from injury.

Dave Gettleman‘s ouster as the Panthers general manager stands as this week’s most shocking NFL story, and Joe Person and Scott Fowler of the Charlotte Observer detail some of the reasons behind his firing. Gettleman’s “brusque management style” and his reshaping of Carolina’s roster after its 15-1, NFC-winning campaign in 2015 contributed to his demise, with his decision to rescind cornerback Josh Norman‘s franchise tag in 2016 helping to decide his fate. Letting Norman loose on the free agent market meant allowing a No. 1-caliber corner to walk away without the club receiving compensation, and it irked some of the team’s players.

A year later, the departure of ex-assistant general manager Brandon Beane also weakened Gettleman’s grip on the GM job. Beane took over as Buffalo’s GM in May, which cost Gettleman the good cop to his bad cop. The loss of Beane negatively affected Gettleman’s work relationships, according to Person and Fowler, as the former “acted as a go-between among the front office, coaching staff and locker room,” the reporters explain. Former Panthers fullback Mike Tolbert, who signed with the Bills after Gettleman released him in February, confirmed that Beane was a valuable figure in Carolina. “As players we all love Beane. We all love being around him,” said Tolbert. “He’s part of the reason we did what we did. I’m happy to have him in Buffalo now, I can tell you that much.”

The Cardinals have re-signed running back Chris Johnson, according to a team announcement. It’s a one-year deal, per a source who spoke with ESPN.com’s Adam Schefter (on Twitter).

This offseason, head coach Bruce Arians has appeared to be content with Kerwynn Williams as the primary backup to superstar David Johnson. Apparently, that’s not quite the case. Johnson will now compete with Williams, Andre Ellington, and fifth-round pick T.J. Logan to be D. Johnson’s main understudy.

CJ2K, 32 in September, is coming off of a rough year which ended with a groin injury. It was his second straight year to be cut short by injury, but it’s important to note that he missed only one career game before first signing with Arizona in 2015.

Johnson has six 1,000-yard seasons (including a 2,000-yard campaign) and three Pro Bowl nods on his resume, but the Cardinals are just hoping that he can offer reliable production in a support role. Regardless how the Cardinals view him, Johnson will be fighting hard for significant carries.

The Cardinals already had one open spot on the 90-man roster, so they will not need to release anyone to make room for Johnson.