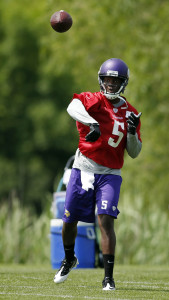 The Vikings quarterback returned to the practice field in May, nine months after his gruesome knee injury sidetracked his career. Tomasson notes this re-emergence included Bridgewater throwing to wide receivers, but the former first-round pick wasn’t cleared to practice. The team will begin practice Thursday from Mankato, Minn.

Minnesota placing Bridgewater on the Active/PUP list does not mean its former starter is shelved for the first six weeks of the season. Were Bridgewater to remain on the PUP once the regular season begins, though, it would. And then the situation would become complicated.

Bridgewater landing on the Reserve/PUP list come Week 1 could cause his contract to toll, meaning he’d still be attached to his 2017 Vikings salary ($2.18MM) in 2018 instead of hitting free agency. The Vikings did not pick up Bridgewater’s fifth-year option. A report surfaced in May Bridgewater’s camp would fight a PUP designation, if it’s believed the passer could pass a physical.

But that is several weeks away. Tomasson reports Bridgewater, who wore a knee brace when he took the field to throw passes earlier this offseason, threw without a brace in a subsequent session.