Five years ago today, the Vikings added what they presumed would be their new starting linebacker. Unfortunately, the veteran’s injury woes continued during his brief tenure in Minnesota. 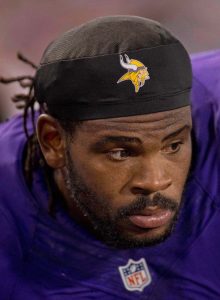 On June 27th, 2013, the Vikings signed linebacker Desmond Bishop to a one-year contract. The 2007 sixth-round pick out of California had spent his entire career with the division-rival Packers, and he proved to be a revelation in Green Bay. After serving as mostly a backup during his first three seasons in the league, Bishop had a breakout campaign in 2010, finishing with 99 tackles (which was more than his previous three seasons combined). He also had a fumble recovery in his team’s Super Bowl XLV win over the Steelers.

His breakout campaign earned him a four-year, $19MM extension, and Bishop followed that up with an even better season in 2011. He ultimately established career-highs with 115 tackles, five sacks, and two forced fumbles. Unfortunately, Bishop suffered a significant hamstring injury during the 2012 preseason, forcing him to miss the entire campaign. He ended up being released by the team prior to training camp in 2013.

After having visited the Chiefs and Vikings, Bishop ultimately decided to join Minnesota. While he was projected to slide into the team’s starting lineup, he lost the gig early on during the 2013 season. Then, in mid-October, the linebacker tore his ACL, ending his season. During his one year in Minnesota, Bishop compiled only five tackles in four games (one start). He’d later have brief stints with the Cardinals, 49ers, and Redskins.

Following a 2012 campaign that saw them go 10-6, the Vikings were probably hoping that Bishop would provide them with a veteran presence on defense (they even released former fourth-rounder Stanford Keglar to make the necessary roster space). Fortunately for Minnesota, they didn’t lock themselves into a long-term deal with the linebacker.

Looking to add some depth to their linebacker corps, the 49ers have agreed to terms on a one-year deal with Desmond Bishop, reports Matt Barrows of the Sacramento Bee (via Twitter). Bishop, a Bay Area native, will return to the team after signing with San Francisco last December.

Bishop, 30, spent the first six years of his NFL career in Green Bay, emerging as one of the team’s starting linebackers in 2010 and 2011. The former sixth-round pick racked up more than 100 tackles in each of those seasons, totaling eight sacks, 10 passes defended, and four forced fumbles in those two combined years. However, injuries have since derailed his career. Bishop suffered a ruptured hamstring in 2012 while with the Vikings, and in 2013, his season was cut short after four games thanks to an ACL tear.

In 2014, Bishop signed with the Cardinals but didn’t see much action in Arizona. After he was released by the Cards for a second time, he caught on with the Niners in December and appeared in two games for San Francisco, logging a pair of tackles.

Another year removed from his season-ending injuries in 2012 and 2013, Bishop could be poised to play a little more for the Niners in 2015. The veteran shouldn’t be penciled in for a major role, but the club will need some help at the inside linebacker spot after having both Patrick Willis and Chris Borland announce their retirement from the NFL this offseason.

Free agency’s impact portion’s conclusion opens the door to early examinations of a star-studded — as of now, before new contracts are signed and franchise tags are applied — 2016 class. USA Today looks at a contingent that includes Eli Manning, Dez Bryant, Von Miller, A.J. Green and Marcell Dareus, among many other top-caliber performers.

The crop is high on pass-catchers and pass-rushers. Demaryius Thomas, particularly if the Broncos cannot get a deal done for Miller this offseason, becomes an interesting name, with Julio Jones and T.Y. Hilton joining Bryant and Green as No. 1 receiving options. Of the aforementioned wideouts, Thomas, who could be franchised for a second straight season, probably has the best chance of reaching the market, with Peyton Manning‘s waning career tied inextricably to his.

Aldon Smith, Justin Houston and Jason Pierre-Paul headline the edge-pursing group, with the disgruntled Houston likely facing a lengthy staredown with the Chiefs and Smith’s off-field issues potentially holding up his future with the 49ers.

With Russell Wilson‘s mega-contract forthcoming with the Seahawks, middle linebacker Bobby Wagner could become an intriguing name in next year’s class.

On to some additional news from Saturday night …

11:54am: As expected, Osgood has been placed on IR as the corresponding transaction, tweets Matt Maiocco of CSNBayArea.com. The 49ers have now confirmed both moves.

10:34am: With their depth at inside linebacker thinning out due to injuries, the 49ers have signed a veteran free agent to help fortify the position, adding linebacker Desmond Bishop, according to Matt Barrows of the Sacramento Bee (via Twitter). Bishop, who was cut earlier in the month by the division-rival Cardinals, had tried out for the Niners last week.

The Cardinals signed Bishop to a contract back in August, released him prior to Week 1, then circled back around to him in October. The 30-year-old didn’t see much action on the field for Arizona, however, and didn’t record a tackle all season for the club.

Bishop spent the first six years of his NFL career in Green Bay, emerging as one of the team’s starting linebackers in 2010 and 2011. The former sixth-round pick racked up more than 100 tackles in each of those seasons, totaling eight sacks, 10 passes defended, and four forced fumbles in those two combined years. However, injuries have since derailed his career. Bishop suffered a ruptured hamstring in 2012 while with the Vikings, and in 2013, his season was cut short after four games thanks to an ACL tear.

The 49ers have yet to announce a corresponding move to accommodate the addition of Bishop, but special-teamer Kassim Osgood underwent surgery on his finger today and will miss the rest of the season, according to Rand Getlin of Yahoo! Sports (via Twitter). The team could move Osgood to IR to open up a roster spot.

49ers coach Jim Harbaugh was not a man of many words following his team’s loss to the lowly Raiders on Sunday. After the game, reporters wanted to question the coach’s future with the organization, but Harbaugh made his intentions clear.

“My priorities are: No. 1, winning football games,” Harbaugh said (via Paul Gutierrez of ESPN.com). “No. 2, the welfare of our players, coaches and our staff. And lastly, is what my personal/professional future is.”

So, does the coach want to remain with the 49ers next season?

“My priorities,” he said, “are winning games.”

As we try to decipher Harbaugh’s comments, let’s take a look at some more notes out of Santa Clara…